A two-day festival is being held in a Scottish Borders pub this weekend to celebrate the life and works of 'unsung' 18th Century Scottish poet Allan Ramsay.

Literary academics, politicians and Allan Ramsay fans will come together for the weekend of 15-16 October at the Allan Ramsay Hotel in Carlops, to celebrate his poetry and launch a new cultural heritage resource centre dedicated to his life and works. 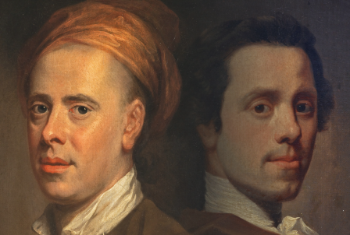 Professor Gerard Carruthers, co-director of UofG's Centre for Robert Burns Studies will be guest at the festival. He summed up the influence and genius of the highly influential Scots poet: 'Without doubt Allan Ramsay is an unsung hero of Scottish poetry. He doesn’t get sufficient praise or recognition for what he achieved during his lifetime, but the impact he had on others around him at the time was monumental, and that is what this festival is all about.

'It's fair to say without Rasmay there would be no Robert Burns. He was the first 18th Century Scots poet and the father of Scots poetry, whose creativity heavily influenced art, music and theatre at that time. Allan Ramsay’s genius really cannot be understated.'

The festival venue is the Allan Ramsay Hotel in Carlops, in the Scottish Borders. This coaching inn was built in 1792 in recognition of Ramsay, more than thirty years after his death. Ramsay was a regular visitor to the area, which became an affectionate inspiration for some of his work. His son, also called Allan, was a famous portrait artist whose celebrated works included portraits of King George III, Bonnie Prince Charlie and Flora McDonald.

Earlier this year, the hotel licensees and festival hosts Rosemary Brown and Kenny Hall secured a £3,720 grant from the Scottish Government fund for rural pubs. They used this to set up a permanent cultural heritage resource centre at the hotel, which will officially be launched as part of the festival. Resources include copies of key works by Ramsey senior, a specially commissioned reproduction of an historic portrait depiction of Allan Ramsay as The Gentle Shepherd, and guided walks around Carlops.

While devising and organising the festival, the Brown and Hall sought support from not-for-profit organisation Pub is The Hub. Chief Executive John Longden said: 'Pub names reflect the times in which they were built and it is fantastic that Rosemary and Kenny are helping to reinvigorate the Ramsay links with overwhelming encouragement from their community. I am delighted that we have been able to guide and support their efforts.'

Plaque for a 'cultural innovator'

The festival coincides with the poet's birthday - 15 October - and on that day local MSP Christine Grahame will unveil an Historic Environment Scotland plaque on the hotel, commemorating Ramsay's status as a founder of Romanticism and modern Scottish poetry.

Among the many contributors attending the festival will be Professor Murray Pittock, Pro-Vice Principal, University of Glasgow and General Editor of the Edinburgh works of Allan Ramsay from Edinburgh University Press. Professor Pittock said: 'Allan Ramsay was not only a pioneer of the Romantic movement and a collector and editor of Scots songs; he was also a cultural innovator of the Enlightenment.

'He founded the first subscription library in the British Isles, the first established theatre in Scotland, where he seems to have pioneered early bird and season ticket options, and co-founded St Luke's Academy, Scotland's first professional training school for artists.

'In his poetry he developed modern literary Scots. Ramsay invented the term 'Doric' to describe Scots and was a huge influence on Robert Burns and all those who came after.'