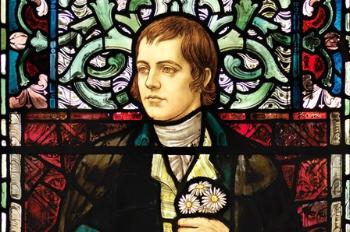 The world renowned Centre for Robert Burns Studies at the University of Glasgow has secured a £1m research grant for Phase 2 of ‘Editing Burns for the 21st Century’.

The research grant, from the Arts and Humanities Research Council, will fund the next five years of the project, which will focus on Burns’ letters and correspondence as well as his poetry.

Reacting to the announcement, Professor Gerard Carruthers, General Editor of the Oxford Edition of the works of Robert Burns, said: “This is tremendous news and we are delighted to have had our funding application granted.

“The funding means we will complete the entire OUP edition of Burns with full-time research support and a world-class website to serve it. As well as three volumes of Burns Correspondence and two of Poetry we’ll also be producing the Oxford Handbook to Robert Burns (forty critical essays based on and around the edition) and web-workshops on editing Burns and on Burns forgery.

“This project is fundamental to the understanding of the writings that Burns left behind. Our team will use many more manuscripts, many more print sources and many more items of information than any previous editors. It allows us at last to produce a thorough and complete edition of Burns across ten volumes. Scotland’s national bard, a world-writer as well, deserves nothing less.”

‘Editing Burns for the 21st Century’ at the University of Glasgow began in 2009, the 250th anniversary of the poet's birth, with the signing of the contract with OUP.

Professor Roibeard Ó Maolalaigh, Vice Principal and Head of the College of Arts, said: “This latest major AHRC award, building on the success of a previous large AHRC grant, reinforces the University of Glasgow as the world-leading centre for the study of our national poet, Robert Burns.

“Professor Gerry Carruthers and his team will bring to light for the first time through publications and innovative workshops fresh materials based on new manuscript and print material discoveries, which will transform our understanding of the man and the poet.”
In January 2011 the Centre was awarded the equivalent of £1.1 million by the AHRC. The grant underpinned the first 5 years of the project, which has produced the first volumes of the edition

Published by Oxford University Press, Phase 1 of the project has just completed, ending with research into Burns’ songs, stripping back the music to how it would have originally sounded. It culminated in a performance on Wednesday of ‘The Jolly Beggars Banquet’ at the University of Glasgow.

The latest funding will underpin research at the Centre for Robert Burns Studies for the next five years. It is estimated the project overall will take at least 15 years to complete.