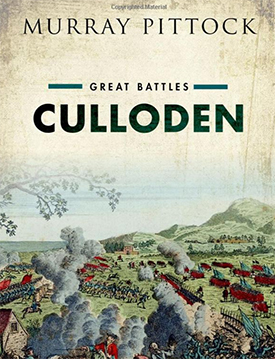 Professor Murray Pittock’s ground breaking study Culloden, published earlier this year on the 270th anniversary of the last land battle to take place in Britain, has been named as one of the ten best history books of 2016 in the magazine History Today.

It was the number one choice of Jeremy Black, Professor of History at the University of Exeter, who said, ‘Murray Pittock’s Culloden (OUP) is not only an account of what happened in that dramatic battle, but also of its continuing resonances in British history. The weight of the past is the key theme, notably in the conflicted myths of Scottish exceptionalism. Thus, from the 1770’s until well into the 19th century, the battlefield was largely forgotten, whereas the situation today is very different. Unlike too much writing on places of memory, this is fresh, concise, free from jargon and well informed about realities.’

Culloden has sold well both in the UK and overseas, particularly in the North American market, and was extensively profiled in the media, including the BBC and Times newspaper and on major history websites on both sides of the Atlantic. Conservative MP Keith Simpson, when profiling his own summer reading list for BBC2 said that Culloden ‘should be required reading for non-Scottish MPs.’

Professor Pittock told Campus E-News, ‘Arguably no battle out of living memory is remembered so powerfully and so falsely. On Culloden Moor what was in some ways the last Scottish army sought to restore the Stuarts to a multi-kingdom monarchy more aligned to European politics than colonial struggle. They were in many essentials a regular army. Outnumbered but not outgunned, cavalry proved their downfall. My own archival research and the battlefield archaeology of the site shows that it was not British ball that brought down kilted swordsmen as much as British dragoon blades that cut down Jacobite musketeers. Culloden as it happened is in fact much more interesting than Culloden as it is remembered."