An international team of scientists, including UofG PhD student Annemarie Pickersgill, have shown that the asteroid which killed the dinosaurs also deformed rocks in a way that may have produced habitats for early life.

Around 65 million years ago, a massive asteroid known as the 'Chicxulub impactor' crashed into the Gulf of Mexico causing an impact so huge that the blast and its knock-on effects wiped out 75% of all life on Earth, including most of the dinosaurs.

Earlier this year, the international team led by scientists from Imperial College London drilled more than 1000m below the sea floor to take core samples of the Chicxulub crater's rocky inner ridges – known as the ‘peak ring’ - to understand more about the ancient cataclysmic event. 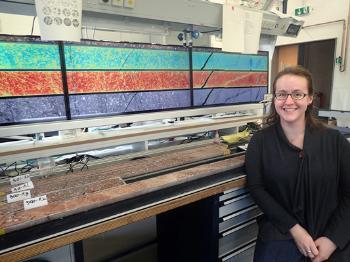 Annemarie Pickersgill is a co-author on the team's first paper, which was published last week in the journal Science. She came to Glasgow from Canada in 2014, and splits her time between UofG’s School of Geographical and Earth Sciences and the Scottish Universities Environmental Research Centre (SUERC). She will be spending the next two years analysing the Chicxulub crater samples to learn more about their structure and estimate more accurately when the impact occurred.

So far, the team's analysis has shown that the asteroid's impact made the peak ring rocks more porous than any models had previously predicted. Porous rocks provide habitats for simple organisms to take hold, and in craters like Chicxulub water heated inside the Earth’s crust would have circulated through these pores, bringing nutrients to the organisms.

Early Earth was constantly bombarded by asteroids, and the team have inferred that this bombardment must have created similar rocks all over the planet, which may partly explain how life took hold.

Annemarie said: 'This is a really exciting opportunity to get involved with world-class research early in my career. I was lucky enough to go to Germany to view the cores the team recovered and pick the specimens I wanted to work with, and the experience of seeing rocks which no human eyes had ever seen before was extraordinary.

'I’ll be using a technique known as argon-argon dating to help us understand more about exactly how long it has been since the Chicxulub crater was created by asteroid impact. The tools available at SUERC allow us to examine the amount of argon isotopes in the samples, which are created by the radioactive decay of naturally-occurring potassium. The longer the rock has been there, the more argon we’ll find, and improvements in the technique mean that we’ll be able to look at the distant past through a sharper lens than ever before.'

The next steps will see the team acquiring a suite of detailed measurements from the recovered core samples to refine their numerical simulations. Ultimately, the team are looking for evidence of modern and ancient life in the peak ring rocks. They also want to learn more about the first sediments that were deposited on top of the peak ring, which could tell the researchers if they were deposited by a giant tsunami, provide them with insights into how life recovered, and when life actually returned to this sterilised zone after the impact.