The Guild of European Research-Intensive Universities was officially launched at an opening symposium on Monday 21 November 2016 in the Bibliothèque Solvay in Brussels. The University of Glasgow is a founding member of this new group of eighteen of Europe’s leading universities from across thirteen countries, and the Principal Professor Anton Muscatelli is the Guild’s vice-chair. 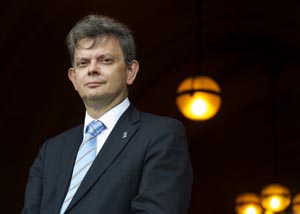 The Guild aims to bring together universities that have demonstrable excellence in teaching, research and policy formation from across Europe to collaborate on the creation of innovative solutions to some of Europe’s most intractable scientific and social challenges.

At the launch, concern was expressed that despite new instruments in Horizon 2020 to support low-performing countries in research and innovation, the research and innovation gap between European universities has widened in recent years. The Guild is now calling for an urgent and critical evaluation of how excellence is supported in Europe. Affirming the importance of excellence as a criterion for funding decisions, the Guild notes that every country, and every global ranking, has framed research excellence in different ways.

The Principal and Vice-Chancellor of the University of Glasgow Professor Anton Muscatelli attended the launch event. He said: ‘Now more than ever it is important that major research intensive universities have a united voice that can impact on both national and international policy in higher education. I am delighted that the University of Glasgow is a founder member of the Guild and look forward to working with partner institutions in promoting excellence in research, teaching and learning.’