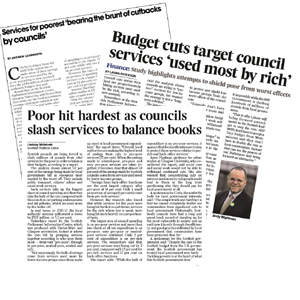 The Urban Studies researchers in the School of Social and Political Sciences found themselves in the media spotlight last week following the publication of a report: "The social impact of the 2016-17 local government budget".

The briefing for the Scottish Parliament assesses the “social impact” of the 2016-17 local government budget by analysing how council savings plans are distributed between “Pro-Poor”, “Neutral” and “Pro-Rich” services.

The report created considerable impact with coverage in most of the mainstream newspapers and across TV and Radio.