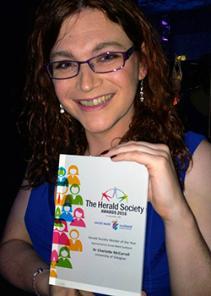 The University of Glasgow's Dr Charlotte McCarroll has been named 'Worker of the Year' at this year's Herald Society awards.

The award, supported by Social Work Scotland (SWS), was in recognition of her work supporting a greater understanding of transgender issues on campus.

The Herald Society Awards was launched in 2008 with the intention of "celebrating the dedication, the imagination and the vital impact of some of the best work taking place in the public and voluntary sector."

Last month, Charlotte was named as Diversity Hero of the Year at the inaugural Diversity Awards organised by The Herald and GenAnalytics in association with Bank of Scotland.