Researchers and practitioners across the UK and Europe came to Glasgow last week for what truned out to be a remarkably topical symposium, on health in prisons. 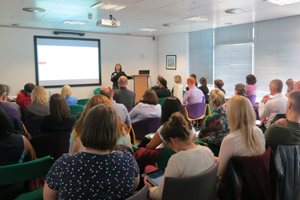 The event coincided with major legislation in England and Wales outlined in the Queen's Speech - including the biggest prison shake-up in England and Wales "since Victorian times". BBC News marked the week by running several 'fly-on-the-wall' items filmed in under-pressure English jails where health problems are a major issue.

The ground-breaking symposium on health and prisons was hosted by the MRC/CSO Social and Public Health Sciences Unit, part of the university’s Institute of Health and Wellbeing. Also involved were the Scottish Prison Service, and the Royal Holloway University of London. Funding for the symposium was provided by the Foundation for the Sociology of Health and Illness.

Research on health in prisons is one of the key themes in SPHSU’s Understanding and Improving Health within Settings and Organisations research programme, funded by the Medical Research Council and the Scottish Government Chief Scientist Office. Their work includes a newly developed intervention, the ‘Fit for LIFE programme’, initially inspired by the successful Football Fans in Training programme. Both FFIT and FIT for LIFE draw on the Unit’s earlier work on gender and health, in particular on research on men, masculinities and health behaviour. The development of the Fit for LIFE programme has benefitted from close partnership working with colleagues in the Scottish Prison Service and Glasgow University.

Speakers from sixteen UK and three European universities explored and discussed a range of methodological and ethical issues related to conducting health research in prisons. Delegates at the symposium drew on experience of researching health in prisons in Scotland, England and Wales, France, Poland and the USA. The symposium benefitted not just from the inclusion of researchers from a range of disciplines in the health and social sciences, but also the perspectives of colleagues from the NHS, the voluntary sector, local government, and the prison service. Many regarded the highlights of the symposium to be the networking opportunities, the sessions from prison officers who have been partners in research, and from serving prisoners. The second day was hosted by HMP Barlinnie, Scotland’s biggest prison, demonstrating the value and importance of partnership working. 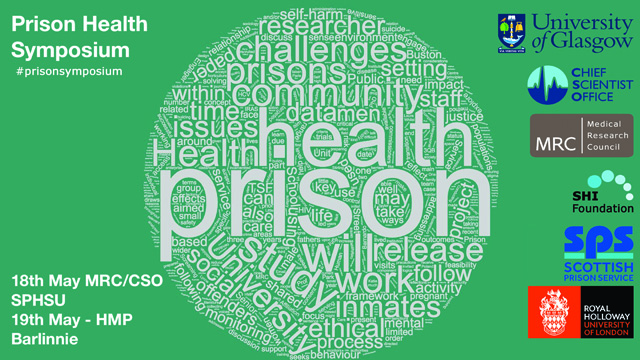 Professor Kate Hunt, Associate Director of the MRC/CSO Social and Public Health Sciences Unit who chaired the opening and closing sessions for the symposium said:
“Prisons and other secure environments are a very important, but often overlooked context for understanding and improving public health. These environments can present many challenges for those living and working in prisons, but they also offer huge potential for improving the physical and mental health of some of the most disadvantaged and marginalised people in society. It was really valuable to discuss the considerations and challenges which need to be taken into account when conducting research in this context.

“The symposium provided a rare opportunity to take a 360 degree view, with input from a wide range of partners and stakeholders, not least prison officers and prisoners themselves. There was a real buzz of excitement over the two day symposium which allowed for sharing of experiences across different sectors and for new networking opportunities.

“People left with renewed enthusiasm for working together to look for new ways to understand health across the criminal justice system and to provide evidence that helps to build a picture of ways to build the potential of prisons to improve health. The discussions we all had were brought into sharp focus by the announcements about prison reform in England and Wales at the core of The Queen’s Speech that coincided with the first day of the symposium.”