Work is now really starting to wind down with most of the focus now on filling in the final section of trenches and the resulting reinstatement work.

The construction team have been working to extend the heating network to the Memorial Chapel. The excavated area on the lawn in the West Quadrangle has now been restored. 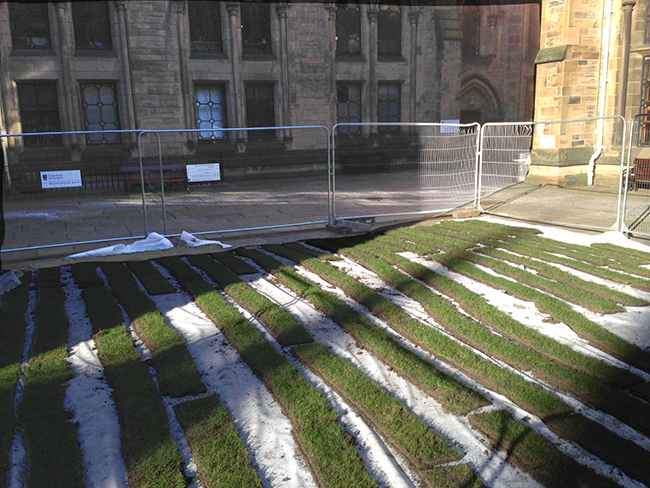 Testing of this area has been completed and reinstatement is underway. Diversions remain in place. There are many services in this area which has made it a complex place to work. The work is expected to be completed in approximately three weeks. A section of excavation is being left open to allow for final flushing of the district heating scheme puipe network. 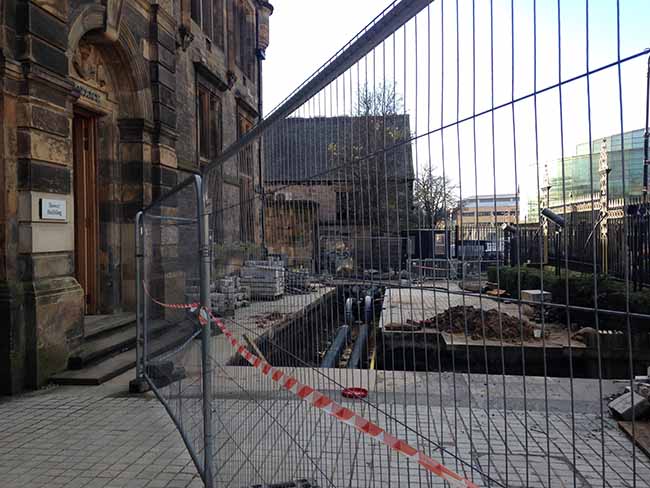 All pipes have been installed ad reinstatement has been progressing. 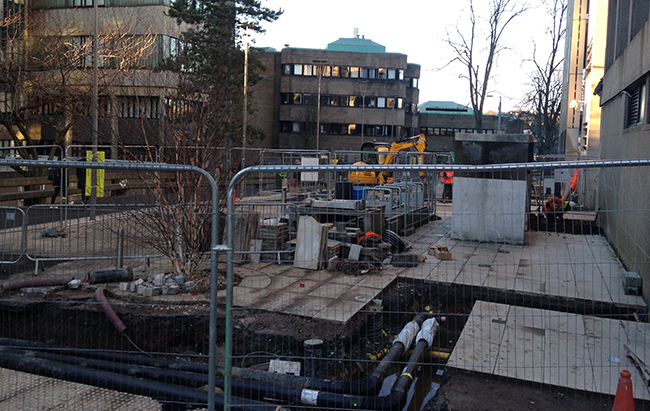 Boyd Orr underpass
Access behind the Boyd Orr to the UofG post room is unavailable while work takes place in this area.

Reinstatement is ongoing and access will be re-opened on the week starting 7 March.

The pedestrian lane down to University Gardens between the Modern Langauges building and Number 14 will be closed while pipework is installed.

Fire escape route will be maintained.  All pedestrians can use access at side of QMU during closure period.

The closure will start on Monday 22 February and last for 4 weeks.

Work continues in Oakfield Lane which runs by the Stevenson building; this will carry on for about three weeks.

Entry and Exit to campus

The Main Gate and the exits at Pearce Lodge, Dumbarton Road and the Chemistry Gate (on to University Place) are all back in operation.  Pedestrian access has been restored from the side of the Gregory Building down to Ashton Lane.

Why did the University invest in this project?

The original intention of the scheme remains unchanged: first and foremost the new system will make a major contribution towards the University reaching its environmental target of a 20% reduction in carbon emissions.

The project has replaced a steam network that was more than fifty years old and increasingly prone to breakdowns which risked disrupting teaching and research. The new, more  energy efficient system is also expected to generate annual savings in excess of £1m each year, with the majority of savings coming in the form of reduced electricity costs.

Finally it was always an objective to try to ensure that it became a teaching resource and the new energy centre near the Davidson building will also be used as a teaching resource for engineering students. During the course of the works a number of local apprenticeships were created.

The District Heating Scheme project is a highly complex and technically demanding operation. It involved installing more than five kilometres of new pipework on the Gilmorehill campus.

We are still on track to complete the works, as intended, by this Spring and the combined heat and power engine at the heart of the project is already generating energy.  Any project of this size will produce exigencies, and both the University and its contractors Crown House are very carefully managing the project which has meant that all the usual, minor problems are addressed and any impact on budget minimised and accommodated within the overall budget contingencies.

The district heating scheme is part of the core infrastructure to support the World Changing Campus that the University of Glasgow will create over the next ten years or so.  Where additional opportunities to connect to the system are identified, bids for capital expenditure will go to the Estates Committee and University Court in the normal way.