Forth and Clyde Canal artworks unveiled

New public art installations will be unveiled along the Forth and Clyde Canal this weekend, paying tribute to the waterway’s industrial heritage and the role it plays today.

The artworks, installed at intervals along the canal side reflect the many industries the canal once served as well as celebrating its changing modern day role as a recreational space and ribbon of regeneration.

The work also highlights the changing status of the canal, with its connections to other waterway networks and uses materials to mirror the canal’s rich history: iron, stone and water.

Three artists Neil McGuire, Nick Millar and the University of Glasgow’s Dr Minty Donald were commissioned for the pieces and they will unveil their work ‘THEN/NOW ‘at a special event being held at The Whisky Bond in Glasgow on Saturday.

Dr Minty Donald, commenting on Then/Now, said: “The project has allowed us to learn about and experience different facets of the Forth and Clyde Canal – as it is today and how it operated in the past.

“It was built for a very specific purpose to move goods as a passageway between the two coasts east and west of Scotland, but that role had been redundant since the 1950s but it’s also now become a very vibrant area where people walk, run and cycle so its purpose has taken a new direction.

“The pieces of art are enduring, they are permanent pieces of art but like the canal itself they will change with the seasonal conditions and the weather. People often think of sculpture as static, fixed and permanent, it doesn’t change but these works are designed to change and age over time.

“We met and worked with a wide range of people and communities who are involved with the canal, studying historic drawings and maps with Scottish Canal’s archivists and taken a field trip with a canal worker who travels 100 miles each day to monitor and manage the water levels.”

On a section of the canal wall the artists have carved the word ‘Then’ and on the opposite side the word ‘Now’.

The project was partly commissioned by Scottish Canals, along with Scottish Waterways Trusat and Glasgow Sculpture Studios.

As part of the project filmmaker Christopher Quinn filmed a barge pulling event where a heavy horse, a group of children, six cyclists and a team of kayakers, pulled a timber-laden canal barge in a two minute time trial. The 15 minute film will be on show at the launch on Saturday.

The project also built a temporary furnace on the site of the former Victoria Iron Foundry, adjacent to the canal, where scrap iron was heated to 1400 degrees centigrade and the molten iron poured into hand-crafted iron ingots, which sporadically line the banks of the canal.

Nine granite boulders, reclaimed from a Scottish Canal’s work yard, are prominent features and are aligned to represent the mapping of the canal across central Scotland. 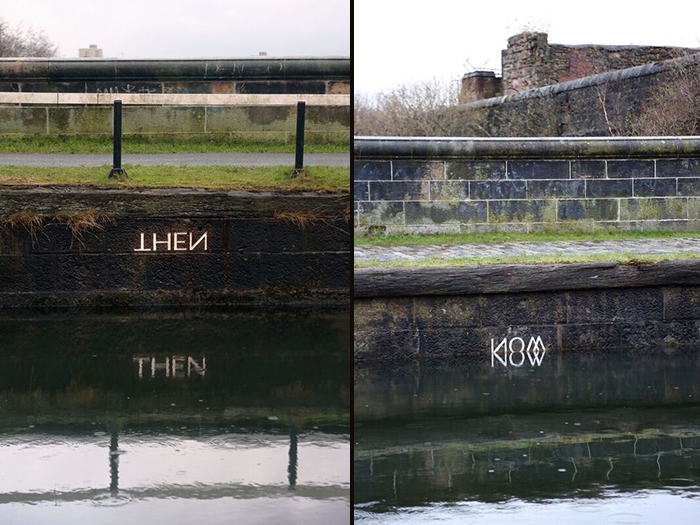