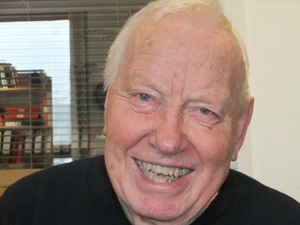 Professor Emeritus Bill Nicolaisen, who has died aged 88, was the Aberdeen scholar who pioneered the use of mapping to establish origin of place names. While spatial translation of maps into place name time-eras is now commonplace across the world, his laborious and enormously time-consuming work began in the pre-computer age.

From an Ordnance Survey sheet, he would strip out post-1500 place names to establish the Scoto-Norman pattern underneath. He then similarly exposed layers of Gaelic, Pictish and pre-Celtic eras right back to river names such as Tay or Spey whose meanings are now lost, but whose existence as ancient monickers confirmed in his view some primitive form of river-worship.

Retiring at 65 from the University of Binghampton, New York, in 1992, he moved to Aberdeen, and soon became engaged with Aberdeen University, continuing place name research on a world stage.

The Story Behind The Name

‌Professor Nicolaisen was one of the world’s foremost experts in his fields, blazing an academic path across universities of the northern hemisphere starting at Kiel, and going by Newcastle, Tübingen Glasgow, Dublin, Edinburgh, Columbus, Binghamton, Aberdeen and Aarhus. In the bygoing, he has enthused three generations of students in language, folklore, literature and cultural history, and in 2001 celebrated a remarkable 60 years as a university tutor.

In May 1960, he pioneered a place name column in The Scots Magazine. The Story Behind The Name ran monthly for an astonishing 23 years, gaining an impressively interested audience. I was among his fans, with the upshot being that half-a-century later, I became one of his students at Aberdeen University,  discovering how much information this distinguished scholar would extract from an apparently simple item as a place name. Not for him merely the etymology: he anchored meaning in terms of time, space and cultural connection as well as form, function and narrative associated with it – undertaking this without once touching on the enveloping jargon of his trade, an argot of onomastics that starts with terms such as toponymy and hydronomy, and goes on to a great deal worse. 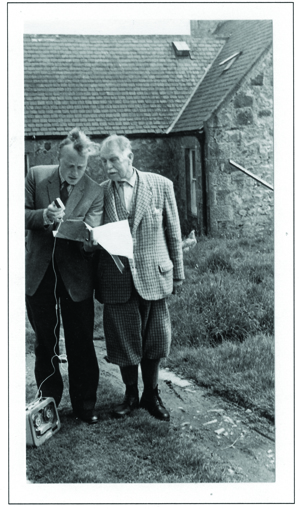 Dr Nicolaisen was no ivory-tower academic, but someone who cycled round Mull in the 1950s lugging a reel-to-reel tape machine, orally recording local place names from residents still acquaint with Mull Gaelic. On foot, bike and bus, he quartered Scotland to locate place names – and not just to record them, but to examine the locality to establish the resonance of the place name in the field.

His learning was lightly borne and exercised with dry wit, with notes for a two-hour  lecture that might comprise seven words in spidery writing on a yellow Post-It. By contrast, a Niagara of publications has poured from his pen - more than 700 articles, essays, addresses, reviews and papers. Unusually for an academic, he succeeded in popularising his speciality without dumbing down.

Wilhelm Fritz Hermann Nicolaisen was born in Halle, Germany, the eldest of three sons of Professor Andreas Nicolaisen, holder of a university chair of agriculture. His early interest in names showed in his quest for his own. It originates in Jutland, and means “son of Nicholas”, or as Bill would gleefully put it, “son of Santa Claus”.

He attended the University of Kiel from 1948, studying studied folklore, language, and literature – though not before being drafted into the Hitler Youth as a 14-year-old – a fate he shared with contemporaries including a young Joseph Ratzinger, now Pope Emeritus Benedict XVI. “It was compulsory to serve in the (Hitler) Youth” Bill told me. “At that age, it seemed to us boys like the Scouts”. As with the former Pope, he was moved at age 17 into the Wehrmacht to serve on anti-aircraft batteries.

Years later in New York, he met an English academic, a wartime RAF bomber pilot. They swapped notes – to discover that while one was raining bombs down in 1944 aboive Schleswig, the other was firing up from the same place. They shook hands, became lifetime friends, and would toast each other in having missed each other.

At the University of Tübingen he chose river names of the British Isles as his doctoral thesis. His professor suggested he tackle the same subject in Scotland. This Bill did, attended Glasgow University to focus on Scottish river names, and learned Gaelic. Post-war paper shortages meant that students shared Gaelic books one between two, and thus Bill met fellow student May Marshall, and married her.

A big handsome man with a ready grin, Dr Nicolaisen delighted in word banter. Asked to name his greatest achievement, he would reply: “I have never been able to teach anyone – only to raise their level of confusion”. Appointed chairman of Scottish Mediaevalists Society, he protested “But I’m neither Scottish nor mediaeval”. When he became chairman of the American Folklore Society, he pointed out that he wasn’t in US - and neither was he in England when appointed to lead the (English) Folklore Society.

“I love folk tales” he said “and folklore has occupied me for over 60 years”. As a boy he read märchen and delighted in fairytales (though he preferred the term “wonder tales”, posing the question: “When do fairies ever appear in these fairytales?”). Thus while his persona is that of a place name scholar, he preferred to be regarded as a folklorist specialising in folk tales and contemporary legends.

In later life, he suffered diabetes, spondelitis and Parkinson’s, all of which he shrugged off: “Brain still works fine”.  A committed Christian, he sang as tenor in church choirs for 45 years, and was a kirk elder.

In 1997, he gifted his considerable personal library to the Elphinstone Institute at the University of Aberdeen. This is due to integrated with the existing Buchan Library to create a research centre in Scottish ethnology.

Professor Nicolaisen died in Aberdeen, and is survived by May, his wife of nearly 60 years, four daughters Fiona, Kirsten, Moira and Birgit, and nine grandchildren.