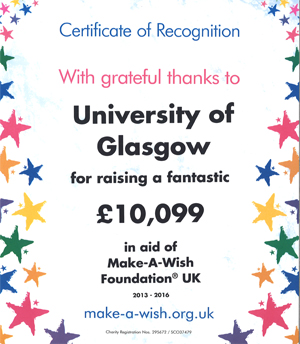 The University of Glasgow staff annual fixture known as DJ's Christmas Party has been recognised by the charity it supports for its contributions.

Organised by Derek Johnston, a Maintenance Services Supervisor with Estates and Buildings, the event has been running for several years.

This year the party raised £4310.00 - the biggest single amount raised from any of the parties in their four-year history. Derek has now been presented with certificates recognising the University's most recent contribution...and even more impressively, the £10,099 raised to date by DJ and his supporters. The certificate was presented by the event's main charity beneficiary, Make-A -Wish UK. DJ's Christmas Party is also supported by the Fergusson Bequest.