Professor Anthony Doyle of the School of Physics & Astronomy has been recognised as a Royal Society of Edinburgh Prizewinner 2016. 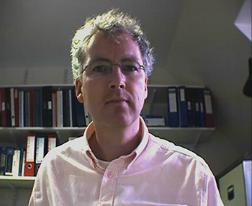 Professor Doyle has been awarded the RSE/Lord Kelvin Medal, a senior prize, for his outstanding contribution to the field of experimental particle physics and for his extensive public engagement activities.

Through developing critical analysis methods, his work has led to major developments that have made the recent discovery of the Higgs Boson possible.

Professor Dame Jocelyn Bell Burnell, President of the RSE said, “I offer my warmest congratulations to this year's talented Prizewinners. They, along with previous recipients, help to advance 'learning and useful knowledge'.”

The awards are presented to individuals at the height of their discipline, as well as those who are showing great potential in the early stages of their career.