Christoph Englert, a lecturer in Phsyics and Astronomy who works on particle physics, has been shortlisted for this year's Blue Peter children's book awards. 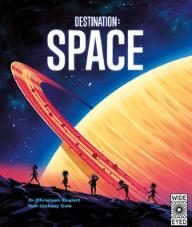 The colourful book invites children to "hop on board the space shuttle and get ready for the ride of your life". The book seeks to let children explore deep space with five fellow space cadets. This journey of discovery takes the reader through our local solar system and beyond, to galaxies far and wide.

Christoph said: "The idea is that with every encounter, children can learn more about the science behind the stars, planets, meteors and comets in our sky, and the history of our universe."

Tom Clohosy Cole is a London-based freelance illustrator, designer & animator. He was born in Brighton, and since graduating from Kingston University he has worked for a number of clients, including The Guardian, The New York Times and Morrisons. This is his first illustrated book for Wide Eyed Editions.

The winners will be announced live on Blue Peter on 23 February 2017, with the winning authors and illustrators appearing on a special World Book Day episode of the show on Thursday 2 March 2017.