The University has named social entrepreneur Matt Fountain its Young Alumnus of the Year. An art history graduate (M.A. Hons 2011), he has made his name not in the art world but as the brains behind an innovative initiative to help prisoners find jobs after release.

Freedom Bakery is an artisan bakery operating inside HMP Low Moss near Glasgow where inmates are training “on the job” under the supervision of professional bakers. Matt said: “The best way to get people prepared for work is to throw them in the deep end.”

Currently, Freedom Bakery supplies a small number of outlets across Glasgow but a second bakery will open in Glasgow early next year where apprentices from Low Moss will be able to continue their training on day release and jobs will be offered to people who have been traditionally excluded from employment. He has received £250,000 of investment from Resilient Scotland to support the opening of his second bakery.

Matt did a Masters at the University of Cambridge after graduating from the University of Glasgow. He was on a gap year, considering whether or not to take up a PhD at Oxford, when he decided that he wanted to “move on and try something to help people”.

He set up a campaign for the homeless, raising funds by cycling 2,000 miles across Britain, unsupported. His encounters, working with small charities across the country and those in need during the height of recession, led him to consider that more could be done to alleviate some of society’s worst problems.

Back in Glasgow, he set out to create a social enterprise that was run like a business, unlike many third sector organisations he had encountered which were in severe financial difficulties.

He started by going back to his academic roots and consulting the University of Glasgow’s Scottish Centre for Crime and Justice Research on rehabilitation. He read research papers and government White Papers on rehabilitation; he examined the economics of social enterprises; and he developed a business model that aimed to best serve the needs of those in custody whilst remaining free of any public subsidy whatsoever. The end result was the creation last year of an artisan bakery at Low Moss Prison, a workplace where inmates could learn new skills, gain confidence and make a high-quality product that people would buy. For every former prisoner who can maintain employment the Scottish taxpayer is saved £940,000.‌

A bakery was an obvious choice, he said: “There is a social aspect to food that has always appealed to me. Then there’s the psychological side. A high proportion of people in custody have mental health problems. Kneading dough has been proved to be therapeutic. Bakeries are calm places, not as stressful as a chef’s kitchen, for example, and that too has beneficial effects. In this scenario the process of training in work is synonymous with the achievement of one’s own personal goals.”

The Governor of HMP Low Moss, David Abernethy, said: “We have many different types of work and activity in the Scottish prison service so, in one sense, Freedom Bakery is just one tiny part of that for half-a-dozen people at a time. But in a bigger sense, this is a trailblazer for the kind of thing that could really turn someone’s life around while serving a prison sentence, by giving them a future version of themselves that is very different to the one that led them into prison in the first place.” 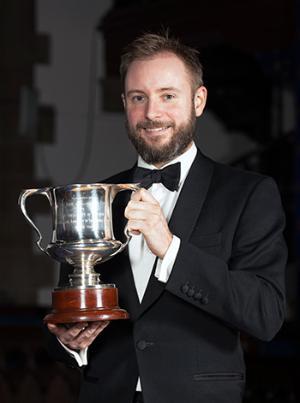 Matt said he felt “extremely honoured” to be made Young Alumnus of the year.

“I really learned how to learn at the University of Glasgow – and that helped me to basically do whatever I wanted. History of art is a subject that requires you to understand the world from many perspectives, to analyse by means that are sometimes not so obvious. In this respect it underlines my approach to business, where it can be a force for good yet robust. I would encourage other students to consider that they can follow whatever career they like. A subject does not necessarily lead you to a destination, and it is the skills you pick up that are invaluable not necessarily the qualification,” he added.

His most inspiring lecturer was Dr Debra Strickland, a mediaeval art historian whose classes were thought-provoking and got students “talking about everything that’s important in the world now. History repeats itself after all!”

Matt said: “The way I approach business is the way I was taught to see the world – to analyse everything around me and read between the lines to find the answer.”

Since setting up Freedom Bakery, Matt has given internship opportunities to three UofG students. He recruited his first intern - a final-year undergraduate studying English Literature/History of Art - through the University's Internship Hub with support from the Santander Universities matched-funding programme..

Matt argues: “One of the defining principles of the Freedom Bakery is to encourage personal and professional development of the prisoners we work with, but the philosophy extends to the staff too”.