There is one week to go to the launch of the 2016 University of Glasgow Staff Survey.

The survey goes 'live' on Tuesday 3 May when every member of the University of Glasgow staff will receive their own personal link to the survey, provided by the independent company Capita Surveys and Research.  None of the individual questionnaires, nor the responses within, are ever seen by the University.  The analysis is carried out by Capita and although the results wil be capable of being broken down to Colleges, Schools, Research Institutes and University Services departments, no small groups and no individuals can be identified.

The staff survey is also being supported by the trades unions who have been involved in the planning process. UCU spokesperson Ann Gow said: "It is really important for us to have the voice of the University staff being heard. The campus trades unions have been fully involved in setting up the staff survey - we've been taking part in all the working groups and have seen all the draft questions. We are thoroughly convinced of the anonymity of the process."

For the UNISON union, Margaret Anne McParland said: "We are trying to encourage as many people as possible to take part in the survey, no matter what their role is at the University.  Cleaning staff for example will be given time during their shifts to complete the survey and the individual managers are right behind this."

Help us spread the word on the 2016 Staff Survey - print off a poster.

For the last few weeks, Campus e-News has been reporting on how different parts of the University of Glasgow have taken action based on the feedback and comment received during the 2014 survey. This week we focus on what has been happening in the College of Science and Engineering.

Recognising from the staff survey feedback the importance of staff communication and engagement, the School of Engineering produced the ‘Working Together 2015-2016’ document. This outlines the aspirations of the School, particularly from the perspective of vision, strategy and values. The document reflected on progress made so far and outlined aims for the year to come (and beyond) and included ‘conversations’ with a selection of individuals from across the School. This engaging document helps to outline where staff fit in, and the importance of their contribution to the School. Other initiatives on communication include the introduction of a Staff Forum within Computing Science using a format specifically designed to encourage two-way dialogue.

The staff survey also highlighted concerns about workload and work-life balance. The new workload model is being piloted across the University. The School of Geographical & Earth Sciences hopes to be able to address workload issues by identifying overworked areas and smoothing out workloads appropriately. Work-life balance matters are also being actively addressed through the School’s Athena SWAN committee. The School of Physics and Astronomy have already achieved the Silver Award and the Schools of Maths and Statistics/Computing Science are planning for Bronze Award submissions later in the year. The issue of work-life balance is firmly on the agenda and is the focus of continuing activity and planning.

Focus has also turned to wellbeing across some parts of the College, with examples from the School of Computing Science including setting up jogging sessions, and working jointly with the School of Geographical and Earth Sciences to facilitate a Yoga taster session. This also addressed areas flagged in the 2014 survey, such as the need to encourage more staff and student joint participation. 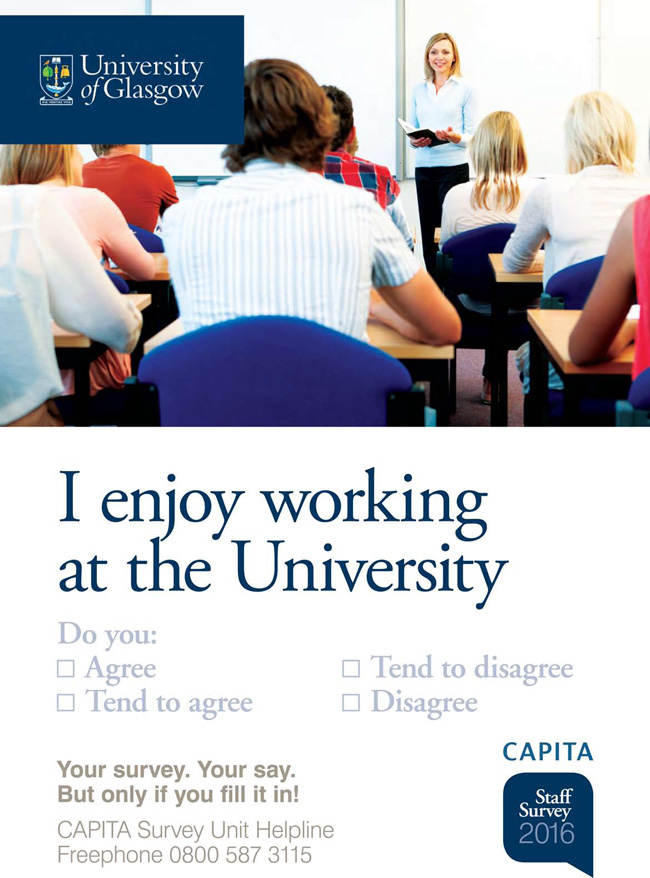