Were you taken in by the April Fools' spoof? Did you pick up the Herald or scan social media on Friday and think, 'the tower is about to become Europe's biggest helter skelter'? Were you pleased or aghast?

Watch the video that went with the spoof:

This year’s April Fools' spoof was orchestrated by the University’s Social Media and Media Teams who worked closely with colleagues in Estates and Buildings, SRC President Liam King and Vice-Principal Professor Frank Coton to pull off the prank.

The trick garnered lots of attention in the media and social media. Here are a few places the story appeared: 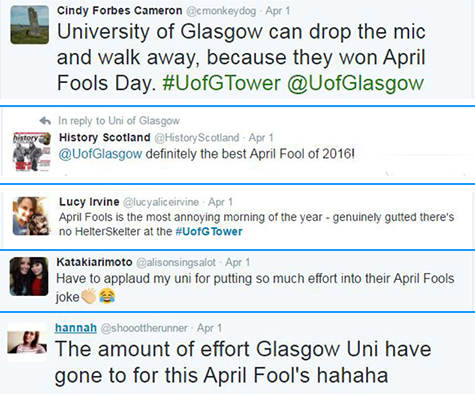 The video was shared on the University of Glasgow facebook page and reached nearly a million people.

How will they top it next year!