Castrati (castrated male singers) in eighteenth century Europewere leading musical figures who dominated performances on the operatic stage. This voice type is now lost to the modern world as the act was banned in the early twentieth century. The very existence of the castrati brings up a number of questions: what did they sound like; how did they influence the operatic world; what legacy did they pass onto other singers? We may never hear what these operatic castrati actually sounded like, but they have left behind a small glimpse.  Podcast of Lunchtime talk. 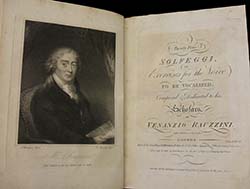 Special Collections, here at The University of Glasgow hold a number of singing songbooks, which were written by some very famous castrati. These were used in order to train both castrated and non-castrated vocal performers in the art of singing. I have performed some of the music contained within these songbooks, highlighting some of the exercises used to train an eighteenth-century opera singer and singing some of the most popular arias from the eighteenth-century operatic stage that would have drawn some singers to the singing profession. It is my belief that the castrati have influenced the way in which modern operatic singers train and perform.

Post-project development: Collaboration with 2014 HAP project First Crusade Fictions
Early eighteenth-century operas by composers such as George Frederick Handel often cast castrati in the leading male role. Many of Handel’s operas were inspired by historical fiction; in fact one of his operas Rinaldo was inspired by Tasso's epic fantasy, Jerusalem Delivered, which is being examined by another Hunterian Associate, Ioulia Kolovou. We will be bringing our projects together in The Hunterian Associates Showcase event on 5th November .

PhD Research
The castrato and his effect on the development of his female operatic students: Venanzio Rauzzini (1746 – 1810)

Venanzio Rauzzzini (1746 – 1810) a famous Italian castrato has now been forgotten, but many of his students such as Nancy Storace (Mozart’s first Susanna in The Marriage of Figaro) are still remembered. My doctoral thesis will examine what training he provided his students, which helped them to achieve an immortal status.