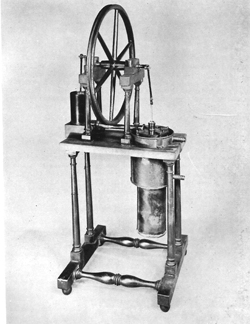 Manufactured by the Reverend Robert Stirling in Galston, Ayrshire
Metal, wood
Church of Scotland minister Robert Stirling patented an almost silent engine which produced motive power from air heated by an external source. He presented this model engine, one of only two ever made, to the University in 1827.
Presented to the University of Glasgow in 1827 by the manufacturer
GLAHM 105225
On display in the Hunterian Museum (Science Balcony)

In 1816 the Reverend Robert Stirling (1790-1878) from Galston in Ayrshire took out the first of three patents for an engine which produced motion from heated air, rather than steam. The air was contained within a closed system of two connected cylinders and a piston, and continuously circulated. An external source provided the heat, and a cold water jacket encased the upper half of one of the cylinders to create a temperature differential. Stirling's key innovation was what he called an 'economiser', a heat exchanger or regenerator which aimed to reuse otherwise wasted heat, potentially resulting in much higher fuel efficiency than in steam engines. He presented this model air engine, one of only two ever made, to the University of Glasgow in 1827.

The model air engine was rediscovered, probably in the cellar of the Old College on the High Street, in 1847 by William Thomson (1824-1907), Professor of Natural Philosophy and later Lord Kelvin. 'I have found a Stirling's air engine… and got it taken to pieces, as it was clogged with dust and oil, and I expect to have it going as soon as I have time', he told a colleague in Edinburgh. Getting the model working helped Thomson in the late 1840s to develop his theories of the relationship between heat and motion, or thermodynamics, a term he helped popularise. Records from the 1870s shows that 30 years after being repaired, the model engine was working and was being ‘used constantly for lecture illustrations’. It had become one of the key instruments used to demonstrate the principles and laws of the new field of thermodynamics to several generations of students in Thomson's world-famous teaching laboratory.

Thomson and other 19th century scientists and engineers in Glasgow such as William Rankine (1820-1872), Professor of Civil Engineering and Mechanics, considered the possibility of steam engines being replaced with air engines to power locomotives, pumps or ships, for example. Air engines had the potential to be more energy efficient, they were silent, and unlike steam engines they were operable in situations when water was scarce. They were also less liable to explode, as steam engines often spectacularly did. Thomson suggested that just as James Watt had improved the Newcomen engine by developing the separate condenser, so might someone improve on the Stirling engine with similar dramatic improvements. Manufacturing difficulties coupled with the difficulty of getting investors, however, meant that steam technology continued to dominate.