We are proud to announce that we at The Hunterian have had a rare opportunity to welcome two stunning 18th-century white marble busts into our collections. On long term loan from private collectors, they arrived in Glasgow in early December and will be on show at the Hunterian Art Gallery, University of Glasgow, when we reopen. 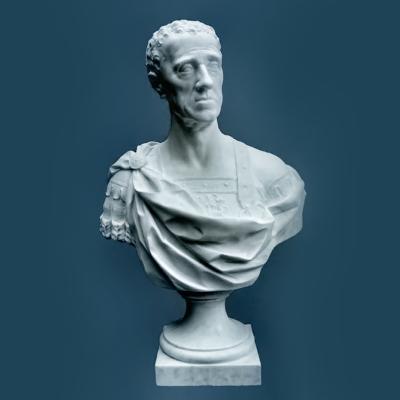 Both have impeccable provenance and had earlier been on loan respectively to the Victoria and Albert Museum and the National Portrait Gallery, London. Their owners felt that The Hunterian, as a University Museum whose genesis dates to the 18th century, would be a most suitable new home for the busts. They are particularly interested in the opportunities for fresh interpretation and study, by visitors and by students.

One is a portrait bust by Flemish sculptor Michael Rysbrack (1694–1770), capturing the likeness of Lord George Hamilton, 1st Earl of Orkney (1666–1737) and dated 1733. Rysbrack was one of the foremost sculptors and designers of his day and at the date of this bust, the leading sculptor working in Britain.

Son of the Duke and Duchess of Hamilton, Lord George Hamilton was a distinguished army officer and a leading subordinate general under the Duke of Marlborough during the War of the Spanish Succession (1701–1714). He also served as a representative peer for Scotland in the British parliament following the Act of Union and was a Lord of the Bedchamber to George I.

Hamilton is depicted by Rysbrack as a Roman military commander, with close-cropped curly hair and furrowed brow. The classical format adopted for this bust was the height of fashion among the political and social elites at that time. However, Rysbrack’s ability to capture the specific features of the head of his sitter imbues his portrait with a liveliness and vivacity that earns it a place among the most accomplished marble busts produced in 18th-century Britain. 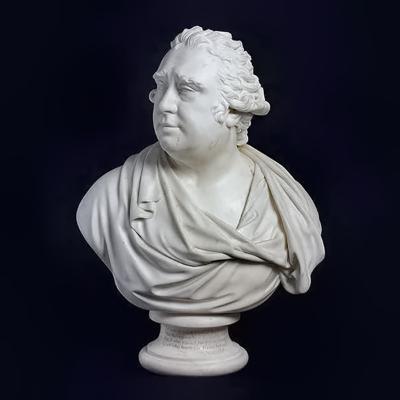 The second bust, dating from 1796, is a portrait by Joseph Nollekens (1737–1823) of the famous Whig politician the Hon. Charles James Fox (1749–1806), whose mother was a patient of Hunterian founder Dr William Hunter.

Considered to be the greatest British parliamentary orator and most charismatic politician of his era, Fox was a strong opponent of Britain’s war with the American colonies. He approved of the French Revolution and was an admirer of Napoleon. Fox was, too, an opponent of British policy in India and he supported the abolition of the Slave Trade.

Often described as the greatest British sculptor of portrait busts in the second half of the 18th century, Nollekens excelled at catching the appearance of his sitters. In his study of the great politician, Nollekens captured the ferocious energy of Fox, reflected in the turn of his head and the dishevelled wig, a remarkable achievement in itself. The bust, described as Nollekens’s ‘most celebrated portrait sculpture’, is a masterpiece in the Baroque manner. It was reproduced in marble by Nollekens for several friends and supporters of Fox and brought the sculptor great fame and fortune.

The 4th Earl Fitzwilliam, Fox’s closest friend, commissioned the bust and on its completion in 1791, gave the first marble version to Catherine the Great, Empress of Russia. Catherine had requested a bust of Fox for her collection as she wished to acknowledge his eloquence in parliament that prevented war between Britain and Russia. Fitzwilliam then ordered another marble version of the bust for his principal residence.

The present bust (the final version to be commissioned by Fitzwilliam) was given by the Earl to Fox’s ‘secret’ wife and long-time lover and companion, the courtesan Elizabeth Armitstead and was displayed in the home at Chertsey, Surrey, that Fox shared with her.

These two magnificent busts will transform The Hunterian’s holding of 18th-century sculpture, as they join works by Christopher Hewetson and John Flaxman, capturing in a few pieces many of the most notable achievements of 18th-century British sculptors.