T. rex in Town is venue for surprise proposal! 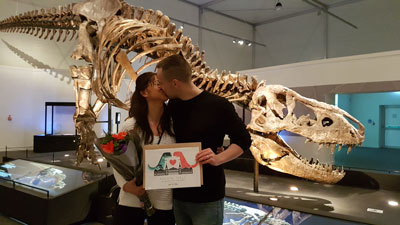 Love was in the air at Kelvin Hall on Sunday morning when the T. rex in Town exhibition became the venue for a very special proposal!

With 66-million-year-old Trix the T. rex looking on, Eero Keski-Petäjä surprised his girlfriend, Ella Linnemäki, by asking her to marry him. And happily, she said yes!

Ella is a huge dinosaur fan and the couple travelled from their home in Finland to Glasgow to see the T. rex in Town exhibition at Kelvin Hall.

‘I wanted to propose in front of a T. rex because Ella loves dinosaurs, especially T. rex. It’s our private joke and Ella is the cutest ever when she watches Jurassic Park.

When I decided to propose to her, I wanted to do it in a way that was meaningful for us and not a cliché.

So one idea led to another, I found out where the nearest T. rex was and planned the trip. And it all went down very well!’

As this is the first time anyone has popped the question while visiting the blockbuster exhibition, staff in the dino-themed gift shop presented the happy couple with a souvenir T. rex print to commemorate the occasion.

The T. rex in Town team was thrilled to be part of this special moment which made their Sunday morning.

Trix won’t have to buy a hat just yet as Eero and Ella have no immediate wedding plans, but hope to marry within the next few years.

T. rex in Town is at Kelvin Hall until 31 July 2019. The exhibition is organised by The Hunterian at the University of Glasgow and Glasgow Museums and has been supplied by Naturalis Biodiversity Center, Leiden.

Glasgow is the final stop on Trix’s European tour, before she returns to her home in the Netherlands.