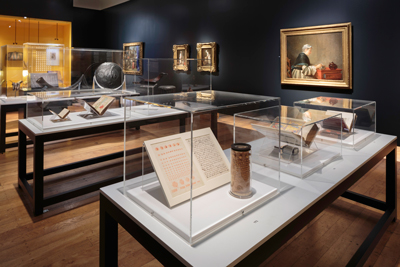 This year we have marked the 300th anniversary of the birth of our founder, Dr William Hunter (1718–1783), with a series of special exhibitions and events. As the year of celebration comes to a close, visitors can still enjoy a number of exhibitions and events at The Hunterian over Christmas and into the New Year.

Our major exhibition, William Hunter and the Anatomy of the Modern Museum, closes on 6 January 2019 but will be open over the Christmas and New Year holidays. This is the last chance to see the stunning show before it moves on to the Yale Center for British Art in the United States.

The last event in the supporting programme takes place on Friday 4 January 2019 at the Hunterian Art Gallery. The special talk by Hunterian Deputy Director Mungo Campbell, highlights an important new acquisition – a painting thought to have been lost for almost 80 years.

The portrait of physician Richard Brocklesby (1722-1797) by John Singleton Copley (1738-1815), was thought to have been destroyed during an air-raid on Bristol in 1940. Brocklesby, an Edinburgh-trained physician and Fellow of the Royal Society, was a contemporary and associate of William Hunter.

In April 1778 Brocklesby happened to be visiting the House of Lords when William Pitt, the Earl of Chatham, collapsed during a debate on the conduct of the ongoing war of independence between Britain and its North American colonies. Brocklesby attended Pitt (who died a month later) and when the incident became the subject of a monumental canvas by the Boston-born Copley (The Death of Chatham, 1781, Tate, on long-term loan to the National Portrait Gallery, London), the artist included a portrait of the physician among more than fifty likenesses included in the composition.

The first London exhibition of the Chatham picture, in the spring of 1781, was an outstanding commercial success for Copley. As happened with a number of the other figures included in the composition, at some stage shortly afterwards the artist was able to offer Brocklesby the chance to acquire a canvas bearing the physician’s own portrait. Subsequently known only through an engraving made at the time of Brocklesby’s death in 1797, the picture passed through the family and was left to The Hunterian by Nicholas Phillipson, the Edinburgh-based historian of the Scottish Enlightenment, who died in January 2018.

Copley’s portrait of Brocklesby is a beautiful example of the American artist’s work in London around the time of his election as a Royal Academician in 1783. Brocklesby, a Quaker, was a school friend of Edmund Burke, a protégé of the Royal Physician Richard Mead, and a friend and physician to both John Wilkes and Samuel Johnson. From his own experience as an army doctor during the late 1750s, he became a powerful advocate for reform in military medical practice. He had wide-ranging interests, including a published study of music in the ancient world and its therapeutic use. Brocklesby and Hunter lived and worked as contemporaries within the same close circles in London and several of Brocklesby’s published works are still a part of Hunter’s library collections.

Mungo Campbell’s talk, Rediscovering John Singleton Copley’s Richard Brocklesby: an American portrait of notable associate of William Hunter, will take place within the William Hunter and the Anatomy of the Modern Museum exhibition at 11.00am on 4 January 2019 and offers an exclusive chance to see this important new acquisition.

As well as the William Hunter and the Anatomy of the Modern Museum exhibition at the Hunterian Art Gallery, visitors can also see two contemporary art displays: Rosengarten and Strange Foreign Bodies. At the Hunterian Museum, as well as the permanent displays, visitors can see two new exhibitions - Byzantium: A Golden Age of Coinage and Thermographica: Visualising the Thermal World of Birds.

Admission to all exhibitions is free.

Image: The William Hunter and the Anatomy of the Modern Museum exhibition at the Hunterian Art Gallery. © Ruth Clark.