Still Moving: The films and photographs of Ulrike Ottinger profiles the influential filmmaker and artist, Ulrike Ottinger, whose work has rarely been exhibited in the UK.

This is the first solo exhibition of Ulrike Ottinger’s films and photographs to take place in a UK art gallery and is part of Glasgow International Festival of Visual Art 2018.

The exhibition at the Hunterian Art Gallery, University of Glasgow, offers a survey of Ottinger’s work from the 1970s to the present day, focusing on the two mediums which have been most central to her oeuvre - still photography and moving image. 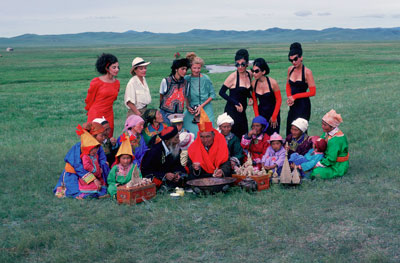 An extensive selection of photographs focuses on images made alongside some of her key films, specifically, the so-called Berlin Trilogy (1979-1984), the fantasy / travelogue Johanna d’Arc of Mongolia (1989), and the epic Taiga (1991). A selection of the artist’s own archival material, including the sketches and scrapbooks which are fundamental to her working processes augment the photographs.

The short films Superbia – the Pride (1986), Still Moving (2009), and Aloha (2016) are also included in the exhibition, which is accompanied by a mini-retrospective screening programme of Ottinger’s full-length works, taking place at Kelvin Hall throughout Glasgow International Festival of Visual Art. A series of related events including an artist talk also accompanies the exhibition.

Ulrike Ottinger is a pioneering artist and filmmaker. Her wildly imaginative work has explored European cultures and subcultures, and rearticulated the relationships between Europe and the rest of the world. Often celebrating bodies and identities represented as ‘other’ within the Western imaginary, Ottinger invites us to see the world differently, through vivid encounters with supposedly marginal individuals, groups and places.

Still Moving: The films and photographs of Ulrike Ottinger is at the Hunterian Art Gallery from 20 April - 29 July 2018. Admission is free.

The Hunterian is the nation’s leading university museum and one of Scotland’s most important cultural assets. Its programme of contemporary art exhibitions has featured works by artists such as Ciara Phillips, Raydale Dower, Neil Clements and Catherine Street.