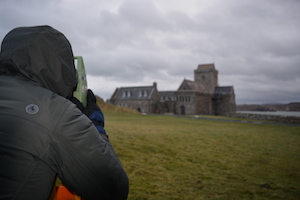 The tranquil Isle of Iona, nestled amongst the Inner Hebrides, has drawn visitors in search of its natural beauty and on pilgrimage for generations. At one point, the island was perhaps the most significant place in all of medieval Scotland. Founded by Saint Columba in 563 AD, Iona is probably most famous for its monastery and as a site of Christian and spiritual importance. However, Ewan Campbell and Adrian Maldonado, from Archaeology within the school of humanities, stress that Iona was also one of the premier centres of learning in Europe during the early medieval period. Despite the continued fascination with the island’s influence and heritage the main excavations and artefacts from the site have been badly managed and published. It was this realisation which led to the foundation of the Glasgow Iona Research Group, a collective of academics in the College of Arts with an interest in developing an Iona research strategy.

Katherine Forsyth [see ‘Set In Stone’ Reach 09] and Maldonado, produced a report for Historic Scotland regarding the redisplay of the Stones Museum in Iona which revealed the extent of the gaps in the narratives relating to Iona’s heritage. This discovery inspired around twenty members of the College, including academics from Archaeology, Celtic and Gaelic, History and Scottish Literature, to form the Glasgow Iona Research Group. Thanks to funding from Historic Environment Scotland, the group have embarked on a collaborative effort to develop a research strategy which will improve the way that the historic site of Iona is interpreted and presented to the outside world.

The first step was to organise two workshops to bring together the various organisations and individuals who are interested in, or responsible for Iona. These organisations include stakeholders and heritage managers such as Historic Environment Scotland and the National Trust for Scotland, who manage the heritage site itself. Representatives from the Society of Antiquities of Scotland, the National Museum and the Iona Cathedral Trust will also be invited. Most importantly, the Research Group wants to consult members of the local community and Argyll and Bute Council to see what they want and need from the land and the site.

For instance, a large number of people make their living off the land on Iona, particularly farmers, and their livelihoods are affected by issues like drainage, which isn’t so straightforward when there is an expansive archaeological site lying under the ground. The research strategy aims to assist local farmers and other residents by keeping them informed during the process of the geophysical survey of the heritage site. This information will also help heritage managers like the National Trust to understand and manage the development of the site. Tourism, especially from religious pilgrims, contributes a sizeable amount to Iona’s local economy, and academics from the research group are also helping the National Trust to develop new walking and pilgrimage routes by contributing their knowledge of the island’s history and culture.

Academics have also been working on redisplaying Iona’s history and heritage, starting with the report produced by Forsyth and that informed the redisplay of carved stones in Iona’s Infirmary Museum in 2013. They helped to select which stones should be on display and the stories which accompanied them.

Ewan Campbell, a senior lecturer in Archaeology, is currently working on writing up the unpublished findings from the late Professor Charles Thomas’ excavations on Iona from 1957-1963. He found that a lot of the artefacts and the information about them had been lost. This led to a trip to Cornwall to visit the retired Thomas to collect the artefacts from his personal archive, and with his permission, to publish that material. Campbell and Maldonado have been working towards publishing the material they recovered from Thomas for the past year. Campbell has since been working with the museum to help them choose which artefacts from that excavation are significant enough to be put on display.

Ultimately, the Glasgow Iona Research Group aims to provide all of the relevant funding bodies and heritage managers the means to develop a strong understanding of Iona, and to inspire further projects in the arts. The island was also known for being a place in which poetry and literacy flourished, where illustrated manuscripts were produced and for Gaelic folklore, language and oral traditions. In fact, the last surviving native Gaelic speaker from Iona has been involved in the various research and arts projects currently ongoing. Musicians, artists and writers continue to be inspired by Iona in their creative endeavours.

In the near future they will begin a new trial of laser scanning of the High Crosses of Iona by the Discovery Programme. The group is also commissioning a field survey and scientific analysis of based on the results of their work on the Charles Thomas excavations. These are just some of the steps devised by the Glasgow Iona Research Group towards a strategy which will unearth more of Iona’s past, and create meaningful impact for the future.

If you’d like to find out more about the Glasgow Iona Research Group, or if you’d like to develop or support a project with an academic in Archaeology, please contact us at arts-ke@glasgow.ac.uk.