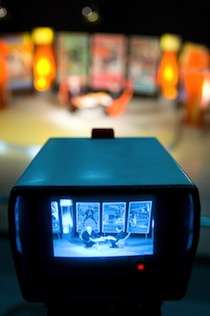 The College of Arts is ideally located in Scotland’s media capital. Glasgow is home to BBC Scotland and Scottish Television (STV) as well as to a host of film and television companies in the Pacific Quay area and nearby Film City. The College of Arts and the Film and Broadcasting industry have a mutually beneficial relationship.

Many of our former Film and Television Studies students hold prominent positions in film and broadcasting institutions in Scotland – from production staff to presenters, casting directors to film festival directors. They regularly return to the College to pass on their experiences to current students, helping them to make a start in these competitive industries.

Through Film and Television Studies and the Centre for Cultural Policy Research, we also conduct extensive work into film and broadcasting.  This includes desk-based research into specific films or programmes, critical production studies, reception of films and programmes in local contexts, and studies into both Scottish and UK cultural policy.

Where possible, we take advantage of the range of potential industry partners on our doorstep. We have links with BBC Scotland, STV, the Glasgow Film Theatre, Scotland’s touring cinemas and the Edinburgh International Film Festival to name but a few. However, our partnerships and research extend well beyond Scotland and the College of Arts engages on a global scale. Current members of staff are board members and/or trustees of the Africa in Motion Festival and the Document UK Human Rights Film Festival.

Due to our many close links and partnerships, our students are also able to gain practical experience of the industry via, for example, collaborative doctoral awards (students studying towards a PhD). Events and screenings are also organised regularly in association with numerous festivals in our Gilmorehill cinema.

Finally, academics make important contributions to a range of television programmes. This ranges from the presentation of new academic research to on-screen interviews exploring a range of interests. Recently, we have been involved in BBC documentaries on the history of tartan and the Scottish voice in film and television.

We are keen to deepen and strengthen the existing strong links that we have with the film and broadcasting industries in Scotland and further afield, but we are just as keen to forge fresh ones.