University of Glasgow replays the Battle of Waterloo

The University of Glasgow hosted over the weekend the world’s biggest ever historical table top war game, replaying the Battle of Waterloo with more than 22,000 miniature soldiers.

A total of 22,435 28mm soldiers, a figure which was verified by an independent auditor, were fielded on a gigantic historical map measuring 192 metres square which recreated the Belgium battlefield of 1815. 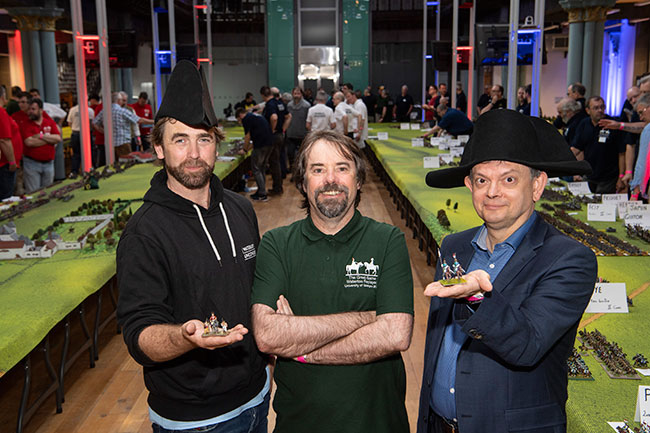 A team of 120 players, made up of war gamers and military veterans of more recent British conflicts, travelled to Scotland from all over the world.

Players taking part in the Great Game: Waterloo Replayed came from European countries including the Netherlands, Germany, Italy and France, and all over the United Kingdom, Ireland, USA, Australia, New Zealand and Singapore.

The spectacular rematch of the famous battle – which marked the final defeat of Napoleon Bonaparte by allied forces led by the Duke of Wellington – was in aid of Waterloo Uncovered, the charity for military veterans, which has been investigating the archaeology of the Waterloo battlefield since 2015.

And just as in real life, the Allied-led forces emerged as the victors in Glasgow. Although in this Great Game rematch of the armies of Napoleon Bonaparte and the Duke was a much closer affair – although even at the time Wellington described it as “A Damn close-run thing!”

The 28mm soldiers, representing every battalion, regiment and battery which took place in the real Battle of Waterloo, were painted over the last year by wargaming enthusiasts, veterans’ groups, students and members of the public. It is estimated that it took more than 50,000 man- and woman-hours to paint the miniature soldiers over the last year so they could be fielded in the Great Game at the University.

Professor Tony Pollard, the University’s Professor of Conflict History and Archaeology, said: “We hoped that the Great Game would capture the public’s imagination and help to raise the profile of Waterloo Uncovered. We have been absolutely astonished at the reaction to this and delighted to welcome so many players and spectators to the University of Glasgow. I want to thank everyone involved for helping to make it such a massive success.

“With an official total of 22,435 miniature soldiers fielded in the Great Game, which has been independently verified, we feel confident to say that we officially have played the world’s biggest ever historical table top war. What a fantastic coup for Glasgow and Scotland.”

The event was in aid of Waterloo Uncovered, the charity for military veterans, which has been investigating the archaeology of the Waterloo battlefield since 2015.

The charity uses a team of professional archaeologists, including Professor Pollard, alongside veterans and serving military personnel, many of whom suffer from a range of physical and mental injuries because of their service, including Post Traumatic Stress Disorder (PTSD). Mark Evans, of Waterloo Uncovered, said: “In line with our charity’s aims of veteran and injured soldiers’ engagement, the Great Game was played out with both experienced war gamers and serving personnel and military veterans of more recent conflicts, including Afghanistan and Iraq.

“We met people from all over the world in Glasgow over the weekend and we want to thank everyone involved for participating and coming to view the Great Game and support Waterloo Uncovered.”

Professor Sir Anton Muscatelli, Principal and Vice-Chancellor of the University of Glasgow, who played Napoleon in the Great Game and helped lead the French Great Game forces, said: “I thoroughly enjoyed taking part in the Great Game although a bit disappointed my side didn’t win. It was a very close-run thing and I think it shows how history could have been so different if different choices had been made in the 1815 Battle of Waterloo.

“We want to thank everyone who came to the University as spectators or who took part in the Great Game, including our international team of players and umpires, our military personnel and veterans, students and staff at the University of Glasgow and the army of volunteers who helped make this all work so smoothly.”