Priceless gift of Burns in Braillie

A rare Braille collection of the complete works of Robert Burns has been gifted to the University of Glasgow because of its strong ties to organisations across Scotland.

Academics at the University’s Centre for Robert Burns Studies have a very long friendship and productive working relationship with the Irvine Burns Club – one of the oldest in the world.

Last week this collaborative partnership saw the Centre being gifted with seven rare volumes of the complete works of Robert Burns in Braille from Joan Muir of Kilwinning.

Mrs Muir, who has been blind since she was three, had firstly gifted the books, printed in Scotland, to the local Irvine Burns Club for safekeeping.

The Club, which owns and manages the Wellwood Burns Centre in Irvine, believed that passing the books to the University, where they will be on permanent loan, was more in keeping with the owner’s wishes that they would not only be preserved but also used.

Mrs Muir said: “I have gained so much from these works of Robert Burns and thoroughly enjoyed owning them for all these years. Although the books are almost 50 years old, the braille dots are still sharp and are easily read by a blind person. It contains all of Burns’ poetry as well as many of his letters.”

She added: “I am delighted that it will now be looked after by the University which will allow others to study and read these Burns poems and letters which are part of our Scottish literary heritage.”

Professor Gerard Carruthers, Co-director of the Centre for Robert Burns Studies, said: “We have had a long partnership with the Irvine Burns Club. We have both gained so much from our friendship and I know will continue to do so in the future.

“These books are beautiful with crisp and sharp Braille characters. The centre was set up to spread knowledge and teaching of Robert Burns. Now we hopefully be able to do so with blind and visually impaired Braille students across Scotland and around the world.”

Professor Roibeard Ó Maolalaigh, Vice Principal and Head of the College of Arts at the University, who will accept the collection on behalf of the University of Glasgow, said: “The books are a wonderful piece of Braille history which helped to introduce Burns to a new audience.

“It is remarkable to think that this collection would have allowed the blind or partially sighted to read the wonderful words of Burns for themselves for the first time.

“We would like to thank Joan and Irvine Burns Club for this generous gift and we will ensure it is kept safe for further generations to study, read and enjoy.”

Bill Nolan, Irvine Burns Club secretary, who accepted Mrs Muir’s gift originally, said: “We were very touched by Joan’s special and almost unique gift. However, when we considered it, we felt that, rather than storing it in our own library at the Wellwood Burns Centre in Irvine, the collection should be offered in perpetuity to the University’s Centre for Robert Burns Studies. We saw that as a perfect fit in linking conservation with the spread of knowledge.

“We hope that this will ensure that other Braille users will have the opportunity to enjoy these complete works of Scotland’s national bard and we would like to thank Joan for her generosity and support.”

The seven volumes were purchased to order by Mrs Muir in the early 1970s from the Edinburgh-based Scottish Braille Press. Mrs Muir bought her Burns’ collection when the original steel plates and hydraulic press from 1913 would still have been in use. This means that the Braille printing is very sharp and clear. But with technological advances, this old printing system is no longer used. 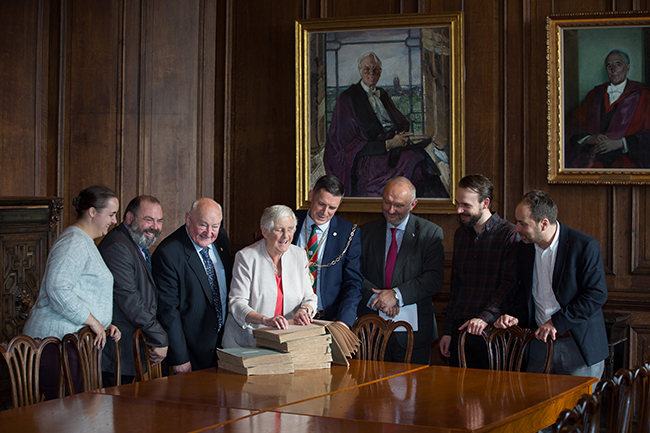