The University of Glasgow is one of four UK Universities that will partner BBC in delivering a series of massive open online courses (MOOCs) on World War One, all of which will be available, for free, on the social learning platform, FutureLearn.com.

The pilot project is part of the BBC’s WW1 season and will see each of the four universities: Glasgow, Birmingham, Leeds and The Open University; deliver a web-based course exploring an aspect of WW1. To create an even richer learning experience, each course will feature material with historical value from the BBC’s vast archive, as well as newly created multimedia content.  All four courses will be open to anyone with an interest in learning more about WW1, with no prior qualification required.

The courses are open now for registration, and will begin between October and November 2014. They are:

The focus of the University of Glasgow’s MOOC will be diplomacy and treaties. The First World War was famously dubbed a 'war to end all wars'. It also led to a large-scale effort to make a 'peace to end all wars'. The Paris Peace Conference of 1919, resulting in the Treaty of Versailles and the creation of the League of Nations, was a hugely ambitious attempt to build a new and more just world order. Often criticised, it left us with two ideas that would change world politics forever: the use of large-scale international conferences to settle world affairs and the idea that the world needed a permanent ‘world organisation’. 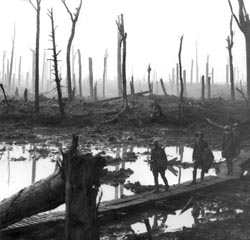 World War One: Paris 1919 - A New World Order? takes an in-depth look at the Paris Peace Conference, and how it has shaped the world we live in today. Learners will look at decisions taken in 1919 - notably territorial settlements and state-building - and discuss their impact on twentieth and twenty-first century politics. Over the course of three weeks, learners will engage with the work of the first world organisation, the League of Nations, assess its failures and successes, and discuss key challenges facing the international community today. Questions to be discussed include: Did the League of Nations fail, and of so why? How did the United Nations emerge? How does the world community of today take decisions on crucial questions of global relevance? Have we learned from the mistakes made at the Paris Peace Conference?

The course will focus on some of the success stories of a century global collaboration – such as the eradication of smallpox.  It will also ask whether the 'Paris model' tried out in 1919 is the right framework for international politics today.

The BBC is providing content including specially shot video - alongside the BBC iWonder guide - Can the Treaty of Versailles help us tackle climate change? This will also include articles and interviews from the University of Glasgow.

Professor Christian Tams, Chair of International Law at The University of Glasgow, said:

“The centenary of the outbreak of the First World War is not just an opportunity to study conflict, but also to focus on the process of peace. This truly innovative course will look at some of the key aspects of what happened after the guns fell silent in November 1918 - and at how world leaders at the time tried to make a 'peace to end all wars'. It will discuss the work of the League of Nations, which today is widely (and unjustly) seen as a failure, and which really served as a blueprint for all subsequent attempts at international cooperation. And the story is brought up to date when we put the spotlight on the United Nations and how that body has endured for so long. This is an exciting and dynamic course that will offer perspectives on many of the major issues the world faces today - issues that need to be debated widely.”