Researchers complete most comprehensive ever study of Mackintosh architecture

Researchers at the University of Glasgow have completed the largest study of Mackintosh’s architectural works ever undertaken, their findings form part of a new exhibition which is now open to the public at the University’s Hunterian Art Gallery.

A new website has also been launched, through which the public can learn more about the remarkably under-researched area of Mackintosh’s architecture. It will not only be a public-facing resource, but will also play a vital role for conservators and the future restoration of Mackintosh’s buildings.

Researchers working on the ‘Mackintosh Architecture: Context, Making and Meaning’ project analysed the construction process behind the 126 architectural works in which Mackintosh had design input. Their findings challenge the familiar view of Mackintosh as the isolated genius. Not only has it defined his role in the buildings produced by the firm John Honeyman & Keppie /Honeyman, Keppie & Mackintosh, it closely charts the evolution of his iconic style, identifies previously unrecorded works, and confirms previously uncertain attributions.

Many project findings will be displayed in the ‘Mackintosh Architecture’ exhibition, opening at the Hunterian Art Gallery, which is the first major exhibition to be devoted to Mackintosh’s architectural work and features over 80 architectural drawings from The Hunterian and collections across the UK. Many have never been exhibited before and are on display alongside specially commissioned film, models and rarely seen archival material.

Professor Pamela Robertson, Professor of Mackintosh Studies at the University of Glasgow and Principal Investigator of the project, said: “Today Charles Rennie Mackintosh enjoys a world-wide reputation. He occupied a pivotal point between the Victorian age and the Modern Movement, yet despite this his architecture is remarkably under-researched.

“This project is the most comprehensive survey of Mackintosh’s architectural work to date. The resource we have created will provide both academics and amateurs with a much broader understanding of his achievements as pragmatic professional as well as exceptional artist-designer.

“The project has allowed us to understand more about the context within which Mackintosh worked, and his wide network of clients, contractors and suppliers, which challenges the familiar description of Mackintosh as an isolated genius.”

In creating the resource, the team conducted an exhaustive investigation of archival material from around the world and visited all of the accessible buildings that Mackintosh and the office worked on. Led by a team of architectural historians at the University of Glasgow, the project took over four years to complete.

The project was funded by the Arts and Humanities Research Council with additional support from the Pilgrim Trust and the Paul Mellon Centre for Studies in British Art. Historic Scotland and the Royal Commission for the Ancient and Historical Monuments of Scotland provided collaborative input. 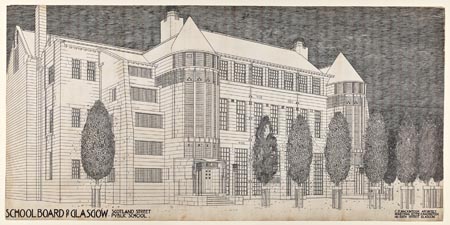