Experts on Robert Burns gathered in Glasgow for the University of Glasgow’s Centre for Robert Burns Studies Conference 2014 featuring Burns research centred on the theme of ‘Homecoming’. 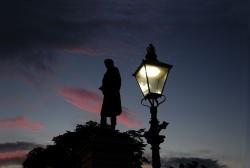 The conference witnessed the first public display of a newly found Burns portrait painted by celebrated Scottish artist Alexander Nasmyth in around 1800. The painting was recently discovered at auction in England and has been named ‘The Shaw Burns’ as it is believed to have been owned by Sir James Shaw, the lord mayor of London from 1805.

Prof Gerry Carruthers, Co-Director of the Centre for Burns Studies, also delivered a lecture detailing new research on a Robert Burns manuscript recently acquired by the Mitchell Library. The 'My Nanie's Awa' manuscript was written in Burns’s own hand and was bought by the Mitchell Library last year. Prof Carruthers will question whether or not the work may in part have been inspired by his relationship with Clarinda (Agnes McLehose) for whom he wrote, 'Ae Fond Kiss'.

The manuscript was also on public display in the Mitchell Library’s Burns Room during the conference. It is the first manuscript acquired by the Mitchell in some years, forming part of what is one of the best Burns collections in the world.

Professor Murray Pittock, Vice Principal of the University of Glasgow and Head of the College of Arts, talked about his research to produce the first comprehensive scholarly edition of the Scots Musical Museum. This will be published by Oxford University Press as part of the AHRC-funded ‘Editing Robert Burns for the 21st Century’ project.

This compilation of Scottish folk songs includes many written by Burns but has yet to be fully edited and annotated by experts. With 150,000 words of commentary this research seeks to definitively establish which songs were by Burns, which were almost by him, which were edited by him and which he collected. The result could change the Burns canon forever.

The annual Robert Burns Studies Conference is the first to be held in partnership between The University of Glasgow and Glasgow Life as part of the Celtic Connections festival.

Robert Burns at the University