Research by archaeologists at the Universities of Glasgow and Exeter has identified a long wall that ran 60 kilometers from the Danube to the Black Sea over what is modern Romania. It is considered the most easterly example of a man-made frontier barrier system in the Roman Empire. 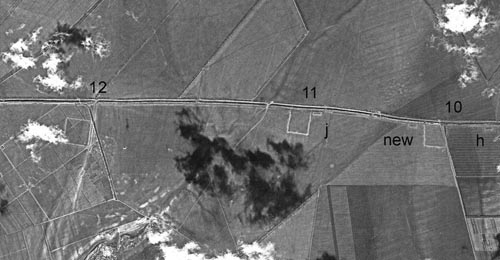 Built in the mid-second century AD, ‘Trajan’s Rampart’ as it  is known locally, once stood 8.5m wide and over 3.5m high and included at least 32 forts and 31 smaller fortlets along its course. It is thought to have served a similar purpose to other Roman frontier walls, such as Hadrian’s Wall, built to defend the Empire from threats to the borders.

Trajan’s Rampart actually consists of three separate walls of different dates; the ‘Small Earthen Wall’, the ‘Large Earthen Wall’ and the ‘Stone Wall’. The constructions were previously known about, although wrongly thought to date to the Byzantine or Early medieval period.

Although it is estimated that over 50% of all archaeological sites in the UK have been discovered from the air, other countries are less well studied. Archaeologists believe that studying declassified photographs taken during covert surveillance may herald a new era for archaeological discovery, and may help to uncover and identify thousands of new archaeological sites around the world.

Tens of millions of images of Europe and the Middle East were taken by Allied and German airforces during the First and Second World Wars and are now held in vast public archives. Alongside this, a considerable historical aerial resource is also now available from the recently declassified covert US CORONA satellite intelligence programme of the 1960s, 70s and 80s, which includes around 900,000 photographs from around the world.

These images are particularly valuable to modern archaeologists as they effectively turn back the clock to a time before later Twentieth Century development changed the face of the landscape through industrialisation, intensive farming practices and urban development.

Bill Hanson, Professor of Roman Archaeology from the University of Glasgow, said: “We believe we have enough evidence here to demonstrate the existence of a chronologically complex Roman frontier system, and the most easterly example of a man-made barrier in the Roman Empire, serving to block an important and strategically valuable routeway. It is an incredibly important discovery for the study of Roman history.”

Dr Ioana Oltean, Senior Lecturer in the Archaeology Department, University of Exeter, said: “Photographs from military surveillance are revealing more than those who took them could have imagined because now, half a century or more later, they are proving to be of enormous benefit in showing us our lost archaeological heritage. Thanks to such images, the landscape of this frontier zone is now known to have been as busy in the past as it is today. We hope that this discovery will provide stimulus for further examination of many more neglected frontiers.”

About the University of Glasgow

Founded in 1451, the University of Glasgow is the fourth oldest university in the English-speaking world. Today it is a broad-based, research intensive institution with a global reach.

About the University of Exeter

The University has invested strategically to deliver more than £350 million worth of new facilities across its campuses in the last few years; including landmark new student services centres - the Forum in Exeter and The Exchange on the Penryn Campus in Cornwall, together with world-class new facilities for Biosciences, the Business School and the Environment and Sustainability Institute. There are plans for another £330 million of investment between now and 2016.