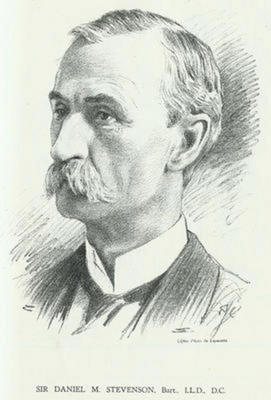 He was a dedicated 'municipal socialist' concerned to improve the lives and broaden the horizons of Glaswegians. Among other causes, he promoted:

After 1914-18 War Stevenson was increasingly devoted to the cause of international understanding.

He became a great benefactor of the University, across faculties and disciplines. He gave money to expand Engineering, fund chairs in Spanish and Italian and bringing Philosophy, Economics and Politics into the ambit of the Citizenship Trust Fund.

In 1921, Sir Daniel bequeathed funds to the University to support The Stevenson Lectures in Citizenship.

Stevenson was elected Chancellor of Glasgow University in 1934 a position which he held until 1944.