Over the past years, almost one in four of all new undergraduate students entering the School each year is female, which was in line with the UK average.  Moreover, the percentage progression rate from 1st to 2nd year, and from 2nd to 3rd year is the same for male and for female students, within statistical fluctuations. Male and female students also show the same preferences for single versus combined degrees, and for Honours versus Masters degrees, indicating that all students take advantage of our flexible range of degrees in similar ways.  This suggests that although only a quarter of our intake is female, those that join us are in no way disadvantaged and have the same chances as their male peers.

Of particular interest is that starting in 2014 there has been a statistically significant jump in 1st year entry by female students from 22% (2003-2013) to 30% (2014-2018).  Statistical analysis shows that there is less than 0.01% chance that this is a random effect, and it seems likely that either societal changes are finally leading to an measureable increase in female students choosing physics or that Glasgow specifically is becoming more attractive to female students.  These increases in physics 1 female proportions are also feeding through into 2nd and 3rd year classes. 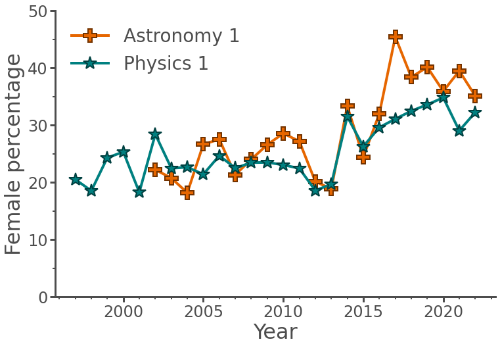 Percentages are very stable over many years, with just small number statistical fluctuations, although the female proportion in Physics 1 has increased significantly from 2014 onwards. 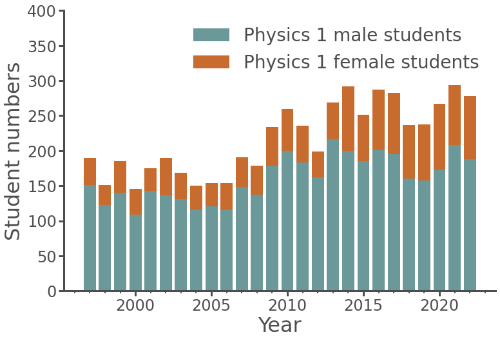 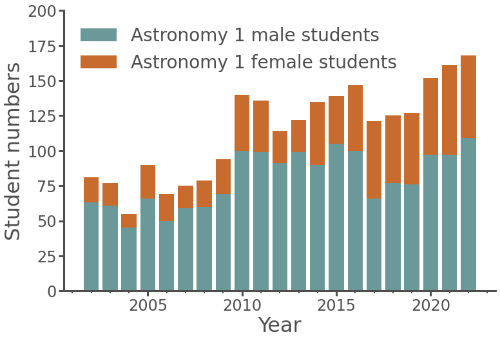 Total student numbers have increased significantly since 2008, and it is only recently that this has affected the female proportion in our entry classes. 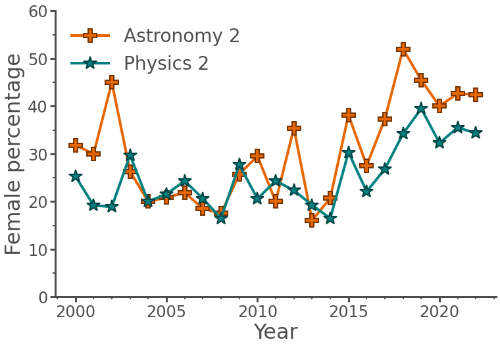 Numbers being smaller in year 2 classes, statistical fluctuations between years can be large, especially for the smaller Astronomy 2 class.  Nevertheless, female percentages are generally fairly stable around 20-25%, as for Year 1 Classes.  The high ratio in 2015/2016 correlates to the high ratio in year 1 in 2014/2015, and similar correlations in following years seem to indicate a significant long-term change. 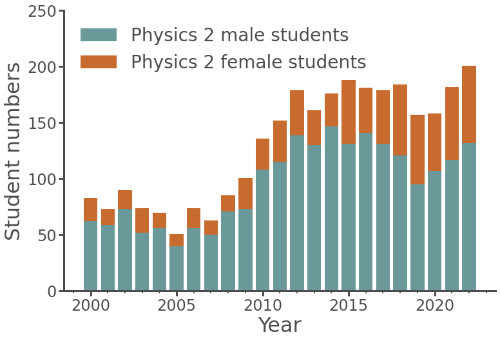 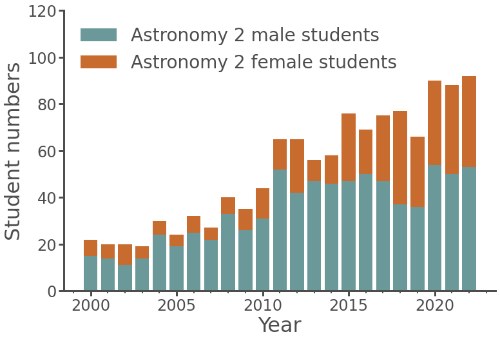 There has been a huge increase in the size of second year classes since about 2008.  This is partially down to the increase in first year class sizes from this date on, but also reflects improved retention of students from year 1 to year 2 in that time.  Seeing as the proportions of females in year 2 has not changed significantly in the same time period, it would seem that this improvement in retention has impacted female and male students similarly. 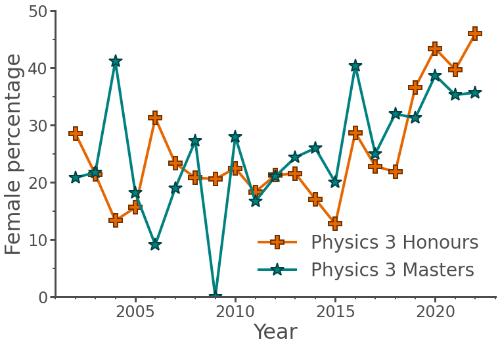 As for lower years, the percentage of female students in our honours classes has been about 20-25% over many years.  These graphs are made by aggregating all honours classes together, including physics, astronomy and all combined degrees involving one or both subjects (otherwise the graphs will become very complex and the small numbers on many combined programmes will lead to huge year to year variations that make trends difficult to discern).  In recent years, there is a weak trend that female students are slightly better represented in the MSci degree stream than in the BSc degree stream.  The recent increases in female percentage in years 1 and 2 do appear to be feeding through into year 3, although due to the lower numbers, showing that this is a statistically significant change will require waiting a little longer. 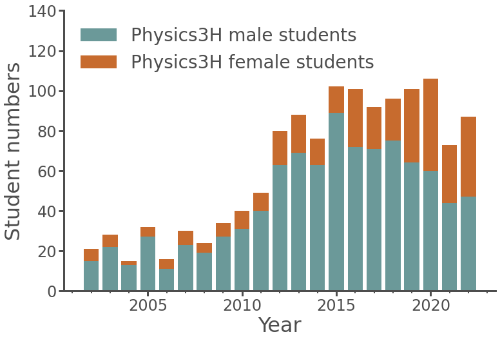 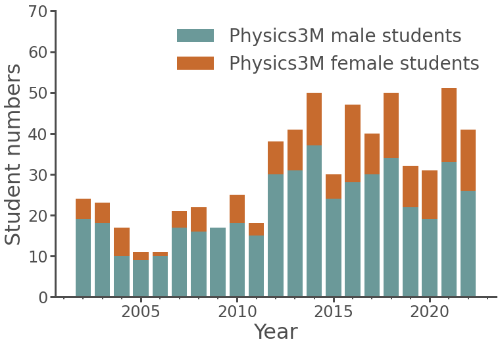