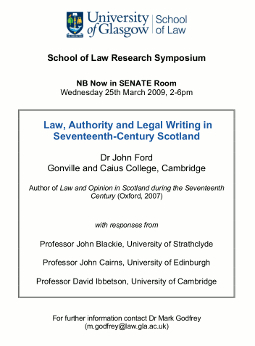 More than 30 scholars and students attended a symposium organised by Professor Mark Godfrey on 25 March 2009 to discuss 'Law, Authority and Legal Writing in Seventeenth Century Scotland'. The symposium was prompted by the publication of J. D. Ford, Law and Opinion in Scotland during the Seventeenth Century (Oxford 2007).

A photograph of the participants is available from our Flickr site.

The framework for the symposium was the debate prompted by Professor Ford's work on how seventeenth-century Scottish lawyers, jurists and judges struggled to make sense of the relations between forms of legal authority in an era increasingly suffused by ideas of political sovereignty, and dominated by tension between conceptions of the learned laws, local law, ideas of natural law, reason and equity. Part of this was how they attempted to formulate coherent conceptions which could be reconciled within the legal order of a particular sovereign state such as Scotland, with its own customs, statutes and court decisions. An important focus of Professor Ford's book was the process of creation and the meaning of the treatise published by James Dalrymple, Viscount Stair, in 1681 as The Institutions of the Law of Scotland. The symposium discussed Professor Ford's purpose in his book of trying 'to discover what Stair himself was trying to do in writing his Institutions' and to do this contextually through examining 'the relationship between the expert opinion of lawyers and the development of Scots law in the century preceding the union of parliaments of Scotland and England in 1707'. The symposium considered Professor Ford's method of systematically exploring the intellectual, legal and political landscape in which seventeenth-century Scottish lawyers existed in order to reconstruct the various contexts in which they worked, engaged with and thought about law.

Prof Godfrey's review of Law and Opinion in Scotland during the Seventeenth Century (published in The Journal of Legal History 29.3 (2008), 369–72) is available from the link to the left.