The campus has a fascinating social and medical history.

In 1809, Dr James Crichton of Sanqhuar purchased the Friars Carse (then called Glenridell) , a country house just outside Dumfries. Dr Cricthon had made his fortune with the East India Company and married Elizabeth Grierson of Lag. Dr Crichton purchased Friars Carse from Mrs Ridell after her husband, Captain Ridell died at the age of 39. Captain Ridell was friends with Robert Burns, his poem ‘The Whistle’ is based on a drinking game played at the Friars Carse, although they had a falling out and Cpt Ridell died before they could reconcile.

Dr Crichton left his fortune to his wife to be put to philanthropic use, she wanted to create a University in Dumfries but was blocked by existing Scottish Universities, and so funded an asylum. The land was purchased in 1834 and the site was established by 1840 with its first building the Crichton Hall, designed by William Burn. Elizabeth Crichton persuaded the phrenologist William A. F. Browne to become medical superintendent and use his occupational and art therapy initiatives to treat patients.

The full site was not finished before the death of Elizabeth Crichton in 1862, a statue of her was erected on the site on 2000. Accommodation in the asylum was by class and provided patients with a library, newspaper, theatre and various activities. In the late 1880’s Sydney Mitchell took over as the architect for the site, his first building being the Crichton Memorial Church, when Dr James Rutherford was the physician superintendent of the site. The trustees of the Crichton Royal Estate also bought another property in Dumfries; the Friars Carse in the 1890’s and used it as a holiday retreat for the patients of the Crichton, pauper patients would serve the higher class patients whilst at the retreat.

Rutherford and Mitchell added further accommodations, a farm, administration block and reception building and patients would work within these occupations depending on their class. The new accommodations were for pauper patients and infirmaries for female and male patients and were to be built close to one another. Rutherford was one of the infirmaries which unlike the other building, Carmont House, had a 2nd floor for nurses and servants. Rutherford also has a tower, which Mitchell fought to add as it looked grand, it was never supposed to serve a purpose or have stairs but stairs were added and you can climb the tower to see fantastic views out over Dumfries. The Cairncross room is the lower room of the tower and the table situated in it was not built for it, it just happened to fit.

The new buildings were functional in 1904. Dr Rutherford retired in 1908 and was succeed by Dr Charles Easterbrook who designed further buildings himself, including McGowan which was to be used as a residential home for nurses. Works began on McGowan (now McCowan) in 1930.

The site closed as an asylum in 1980’s and was purchased by Dumfries and Galloway Council. In 1995 the Crichton Development Company took over its lease and started to redevelop the site, this included the University Campus which the University of Glasgow joined in 1999.

They took on the lease for Rutherford and McCowan and created the central foyer/atrium area to join the 2 buildings together. The 2 buildings have different ceiling heights, being built in very different architectural era’s, and so although both buildings have 3 floors, ground, 1st and 2nd there appears to be 4. 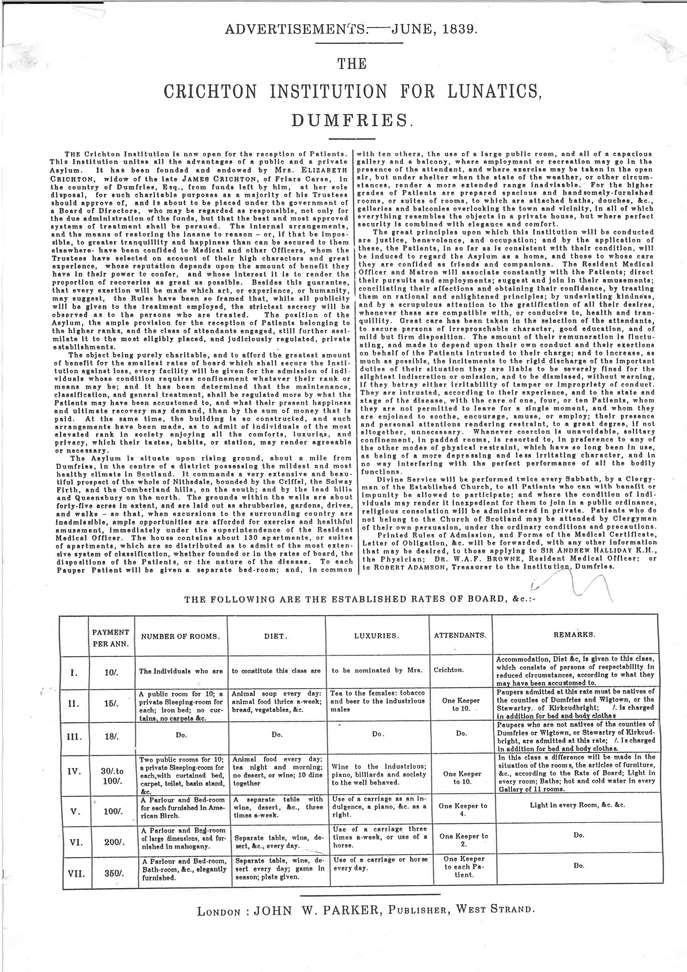