The site of Kourion lies on the south coast of Cyprus, on and around a triangular plateau overlooking the sea to the south and the Akrotiri Peninsula to the south-east. It is 3 km west of the Kouris River, and exploited the alluvial land created by that river. 150 years of excavations have produced evidence for a thriving city lasting from the Late Geometric to the Late Roman periods, with prehistoric predecessors and Medieval successors to the east round the modern village of Episkopi. 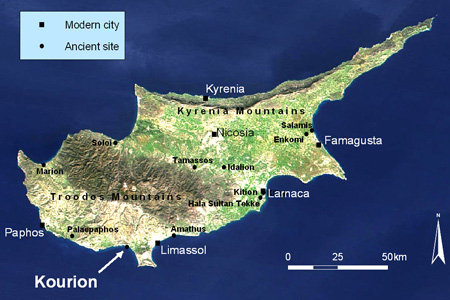 In the flat ground immediately below the Amathous Gate Cemetery lies the probably Byzantine church of Ayios Ermoyenis, itself surrounded by tombs of the Archaic to Roman period. There seem to be no tombs to the west of the Amathous Gate, thus restricting this cemetery to a very specific area below the Acropolis cliff.

The main road leaving ancient Kourion by the Amathous Gate almost certainly did not follow the line of the modern Kourion Theatre Road. This modern road was only made possible by a massive embankment which obscures the lower cliff. The ancient road ran directly south-east from the Amathous Gate, where a broad and regular ramp leads gently down from the gate to the fields below. 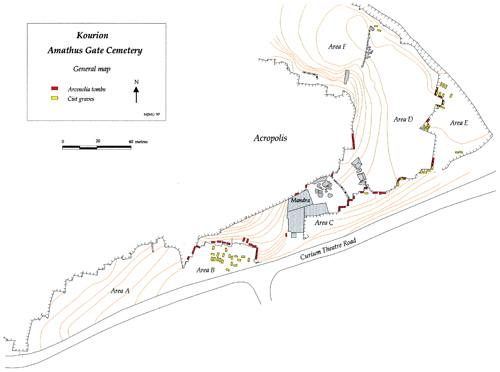 We divided the Amathous Gate Cemetery into seven distinct areas, termed Areas A–G. This whole area was mapped and its visible remains recorded (mainly cist tombs, quarrying and facetting, and chamber tombs). Area B was excavated entirely, along with a range of exploratory trenches in Area A and some individual cist tombs in Area E. 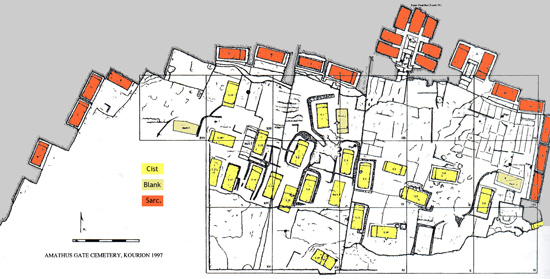 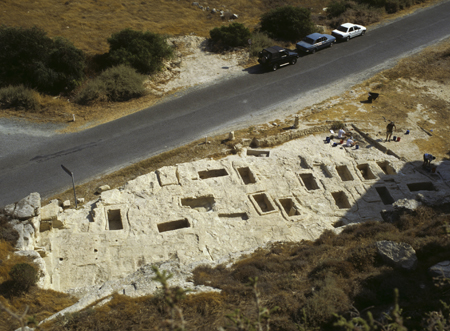 The pottery assemblage from the site proved to be a major source of information for investigating the connections of Kourion with the rest of Cyprus and the Eastern Mediterranean. The fine wares and transport amphorae demonstrate trade relations both within the island and further afield. Our numismatic and stone assemblages provide supporting evidence to address issues of the broader connections of Kourion. 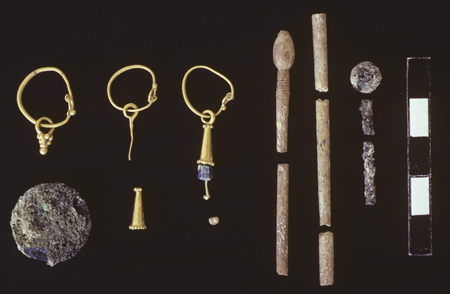 The human remains constitute an exceptionally well-preserved body of material, with c. 125 individuals studied. Pathologies include osteoarthritis, healed fractures, possible cribra orbitalia, and some developmental defects, though dental health is generally good. They allow excellent comparisons with populations from elsewhere in Cyprus, and from Crete and Carthage.

Our reconstruction of Kourion’s funerary landscape shows a very deliberate placing of chamber tombs along a dedicated ‘cemetery road’. Even after this road had been partially quarried away, individual sarcophagi of the old chamber tombs remained visible in the vertical rock faces left by the quarrying, and the subsequent cist tombs still referred to this road, placed so that they clustered along its route. 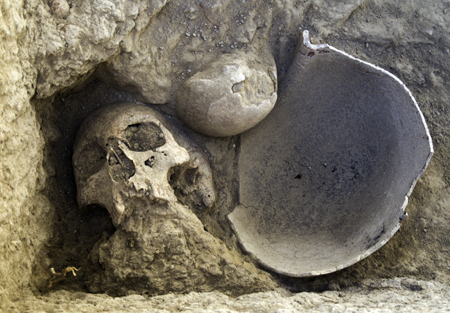 Skull and cooking pot in situ (Tomb B15)

The combination of material culture and human remains within a funerary and urban landscape provide an opportunity for an extensive study of life at Roman Kourion. This ranges from an overview of the position of the city itself in Cyprus and the Eastern Mediterranean to the details of customs, daily life, and the well-being of its population.