Danielle A. Parks graduated from Brown University in 1988, with degrees in Latin, archaeology and hydraulic engineering. She did her Masters degree at the University of Missouri, writing her thesis on the Roman coins of Cyprus (published as a book in 2004). She went on to do a PhD on burial customs in Roman Cyprus, also at the University of Missouri, under the supervision of Prof. Kathleen Slane. She spent several seasons working on the excavations of Kalavasos Kopetra in Cyprus, and in 1995 directed a new excavation of Roman tombs at Kourion’s Amathous Gate Cemetery. 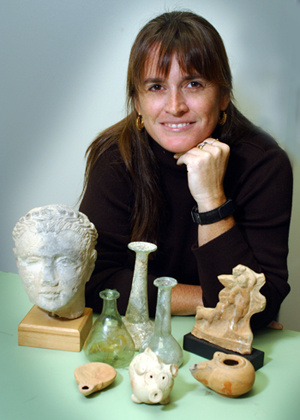 Danielle A. Parks with artefacts from Brock University’s Cypriot collection

After receiving her PhD in 1999, Danielle was awarded a National Endowment for the Humanities post-doctoral award to continue her research at the Cyprus American Archaeological Research Institute (CAARI) in Nicosia. From 2001 she taught in the Department of Classics at Brock University, St. Catherine’s, Ontario.

Even after she was diagnosed with leukemia in late 2004, Danielle continued teaching, writing and giving public lectures. She was instrumental in setting up a new Masters program in Classics at Brock, and continued supporting her students and colleagues even from her hospital bed. She died in July 2007.

The Danielle Parks Memorial Fellowship  at the Cyprus American Archaeological Research Institute was set up in her name to support graduate students of any nationality who are working on the archaeology of Cyprus. The Department of Classics at Brock University set up the Danielle Anne Parks Memorial Scholarship to support graduates of that Department studying Greco-Roman culture.

Obituary by Kathleen Slane in the University of Missouri’s Communiqué (p. 5)

Parks, D.A., M. Av’iam, and E.J. Stern 1997 Clay coffins from Agia Napa-Makronisos and their connections. In S. Hadjisavvas (ed.), Agia Napa, Excavations at Makronisos and the archaeology of the region, 189-196. Nicosia: Cyprus Department of Antiquities.

Parks, D.A., and N.E.M. Chapman 1999 Preliminary report of the 1998 excavations at Kourion's Amathus Gate cemetery. Report of the Department of Antiquities, Cyprus: 259-268.

Parks, D.A. 2002 Epitaphs and tombstones of Hellenistic and Roman Cyprus. In C. Callaway (ed.), Ancient journeys: a festschrift in honor of Eugene Numa Lane: The Stoa: A Consortium for Electronic Publication in the Humanities. http://www.stoa.org/lane/.