The citation read: "Tony is that rare beast – a celebrity archaeologist – who first came to public notice with his innovative television series on battlefield archaeology, Two Men in a Trench, which he presented alongside Neil Oliver in 2002-2003. Since then, he has successfully used his media profile to pursue academic research alongside his quest to develop a wider public appreciation of battlefield heritage. He has done this through appearances in a wide range of TV documentaries, ranging from Time Team specials through to more recent contributions to series such as National Geographic’s Nazi Megastructures. 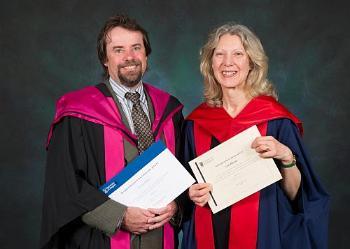 "This year his broadcast work was nominated in two categories in the Celtic Media Festival Awards, and his BBC documentary series Quest for Bannockburn, in which he renewed his onscreen relationship with Neil Oliver, was awarded Best Factual Series. The Bannockburn series is characteristic of Tony’s work – building on several years of academic research undertaken by Tony and his colleagues and creating vivid images of past events through good honest down-to-earth archaeology, drawing upon the contributions of metal detectorists,  stuntmen, military strategists, cutting edge computer-graphics, and some 1200 volunteers including school pupils, local history groups, and armed forces veterans.
Indeed, Tony is notable for engaging war veterans and serving members of the armed forces with their history and archaeology. Since meeting Harry Patch, the last surviving WW1 veteran who died in 2009 aged 111, accompanying him on his final visit to Flanders and hearing first-hand about his experiences, Tony has been passionate about the value of involving veterans in his work.

"While filming Channel 4’s Digging the Great Escape, in which Tony led a team to find the famous Stalag Luft III escape tunnels, he worked with veterans and saw the effects that confronting war history and archaeology can have on those who had themselves served, and he has subsequently sought to incorporate veterans in many of his projects, recognising the value of their experiences of conflict in understanding past battlefields. He has done this through working with Operation Nightingale, an initiative which helps rehabilitate injured soldiers recently returned from Afghanistan. This year he has been involved in Waterloo Uncovered,  a project developed by members of the Coldstream Guards and led by Tony, and designed to undertake the first ever comprehensive archaeological survey of the battlefield. He is also working with veterans of the Falklands War to develop a project around the archaeology of those battlefields before the physical evidence on the islands deteriorates any further.

"On our own doorstep, Tony has been working with the University’s Archive Service to engage our staff, students and alumni, together with schools, local and military heritage groups, in a Great War project which seeks to remember the individual lives of the 761 staff and alumni who died in that conflict. During this, he has rediscovered the University’s impact on the rehabilitation of the veterans of the Great War through the work of Sir William Mcewan, Glasgow’s professor of surgery and the chief surgeon of what was to become the well-known Erskine Hospital charity who are celebrating the centenary of their foundation next year.

"Tony would be the first to remind us that in all this he is aided by other members of the team. But there is a reason why he currently appears on a banner on the railings along University Avenue with a caption which reads ‘Inspiring people with ambition’. Tony’s work in ensuring that the significance of battlefields are recognised internationally and his engagement of the public through his media work and in his work with veterans, is inspirational, and, in turn, he inspires others through his example."