Fr Stephen was appointed as Co-ordinator of Spiritual and Pastoral Formation in October 2015, and took up post in January 2016.

During this time he was Director of the Diocese of Motherwell Diocesan Pastoral Centre, Newmains 2013-2015, and Religious Education Adviser (Primary) for the Diocese of Motherwell 2009-2013.  In conjunction with this latter role, he was a member of the RE Develoment Group of the Scottish Catholic Education Commission (2009-2011), which helped to develop the This is Our Faith syllabus for Catholic schools.

He has been a high school chaplain to Cardinal Newman High School, Bellshill (1999-2003) and Taylor High School, New Stevenston (2004-2009), as well as to his local primary schools of St Bride's, Bothwell, St Mary's Hamilton, and St Bernadette's, Motherwell.

He was a member of the teaching staff at Sctus College Bearsden (2000-2009), teaching courses in Christology, Ecclesiology, Theological Anthropology and Sacraments of Initiation.

He was also youth chaplain to the Diocese of Motherwell (1999-2002), and before his ordination Scout chaplain (Assistente ecclesiastico) to Roma 24 Scout group, Rome 1992-1997.

He has for many years been involved with HCPT - The Pilgrimage Trust Easter Lourdes pilgrimage, and is currently group chaplain to Group 89 (2010-2016) and Scottish regional chaplain.  He also took 2 student music groups to Lourdes to support HCPT - Hosanna House groups in summer 2016.

He is an active member of the charity Classrooms for Malawi, and travelled twice to Malawi in 2012 and 2013 with the charity.  He was also a founding member of the St Bernadette's Malawi Partnership.

He is fluent in Italian, Spanish and French.

His hobies include Munro bagging, golf, playing guitar and travel.

Reilly, S. (2021) Decolonising the curriculum in the light of the Incarnation. Catechetical Review, 7(4),

Reilly, S. (2021) Decolonising the curriculum in the light of the Incarnation. Catechetical Review, 7(4),

Fr Stephen is a University Lecturer.

He also teaches on the following courses:

- PGDE Catholic Teacher's Certificate in Religious Education for students at the University of Strathclyde, Edinburgh, Dundee, and UWS.

Fr Stephen is a member of the Pedagogy, Praxis and Faith Research and Teaching Group.

He is a member of the St Andrew's Foundation for Catholic Teacher Education.

He currently sits on the School of Education Learning and Teaching Committee, and the Board of Catholic Education.

Fr Stephen's title is Co-ordinator of Spiritual and Pastoral Formation, and this encompasses many pastoral activities undertaken with staff and students, under the auspices of the St Andrew's Foundation.

Much of this work is co-ordinated by the Student Pastoral Planning Team (SPPT), which was founded in early 2016, and which comprises students from a variety of year groups and courses (MARE, PGDE and MEduc).

Highlights of the work of the SPPT so far are:

- Lenten School of Prayer for staff and students.

- Holy Doors Challenge, involving students in a dash around the 8 Scottish cathedral Holy Doors in 24 hours using public transport.  This event raised £4,000 for Classrooms for Malawi.

- student walking pilgrimage from the St Andrew's Building to Schoenstaat shrine in Clachan of Campsie, involving 15 students and 2 staff. 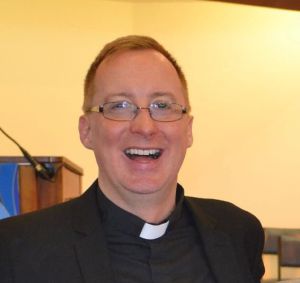