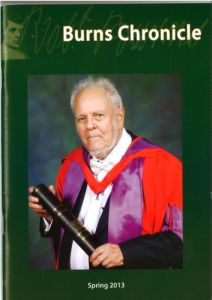 The Centre for Robert Burns Studies at the University of Glasgow has lost a great friend with the death of of George Ross Roy (known to his family and friends as Ross).  He was 88.

The modern editor of the letters of Robert Burns, one of the bard's greatest bibliographers and the builder of the best Burns collection in North America, Ross Roy was someone who was extremely generous with the scholarly resources that he established.  The W. Ormiston Roy Memorial Research Fellowship, funding a period of summer study in the Burns collection at Columbia, South Carolina, was named in memory of Ross's grandfather who had begun the collection in his native Canada.  Four members of the School of Critical Studies were the fortunate receipient of this award over the years.

After serving in the Royal Canadain Air-force as a bomber-navigator during World War II, Ross took his doctorate at the Sorbonne and it was in France where he met his wife Lucie.  Lucie was his close comrade in all aspects of his life, and together in 1963 the pair established the journal, Studies in Scottish literature, which has proved one of the great resources for and disseminators of scholarship in Scottish Literature over the past half century.

Ross became an Honourary Fellow of the Burns Centre at Glasgow in 2007, the university awarded him a doctorate in 2009, and in 2010 the Universities Committee for the Teaching of Scottish Literature (comprising all the universities in Scotland where the subject is taught) in partnership with the then Scottish Arts Council established the Ross Roy Medal awarded annually to a postgraduate thesis demonstrating exceptional excellence.

Chair of Scottish Literature Since 1700

Deputy Head, School of Critical Studies and Co-Director of the Centre for Robert Burns Studies