Enhancing the text of Hansard from 1803-2003
for linguists, historians, cultural scholars and the public. 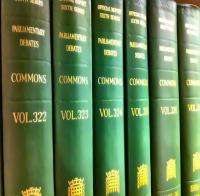 The Parliamentary Discourse pilot project worked on enhancing data from two hundred years of the UK Parliament in order to expose it to a wider audience within Higher Education and to the general public.

The project was a collaboration between the University of Glasgow Enroller project (a joint initiative of the National e-Science Centre and Glasgow's College of Arts) and two further partners:
the General Architecture for Text Engineering project (GATE) at the University of Sheffield, and the UCREL centre for language processing research at Lancaster University.

Further development on the outputs of this project was carried out as part of the 2014-15 SAMUELS project, also led at Glasgow, and the Hansard Corpus is now available online here.

The Parliamentary Discourse project team is as follows.

For further details of each team member,
please select the link below:

Professor Christian Kay | Principal Investigator | University of Glasgow
Christian Kay (1940-2016) was Professor Emeritus of English Language at the University of Glasgow. She joined the department in 1969 as a Research Assistant on the Historical Thesaurus of English; forty years later, in 2009, she brought the project to publication as the Historical Thesaurus of the Oxford English Dictionary (HTOED). The thesaurus met with considerable media interest and critical acclaim, winning the Saltire Society Research Book of the Year Award in 2009. Sales of the HTOED have far exceed expectations, and royalties are now being used to fund postgraduate scholarships in English language. Professor Kay's primary research interests are in historical semantics, classification, and the application of the cognitive semantics paradigm to the development of the English lexicon. In addition to the Historical Thesaurus, a classification of the English lexicon from Old English to the present day, she co-edited A Thesaurus of Old English (Roberts and Kay, 2000), and directed its online version (British Academy funded, 2005). She also founded the Scottish Corpus of Texts and Speech (SCOTS) and contributed to its sucessor, the Corpus of Modern Scottish Writing (CMSW).

Jean Anderson | Project Director | University of Glasgow
Jean Anderson was the Resource Development Officer for the School of Critical Studies and a member of the Humanities Advanced Technology and Information Institute (HATII) at the University of Glasgow. She is the Principal Investigator for Enroller and was co-director of the EPSRC and AHRC funded
Scottish Corpus of Texts and Speech (SCOTS) project.

Dr Marc Alexander | Research Associate | University of Glasgow
Marc Alexander was previously the Research Assistant for Enroller (2009 – May 2011) and then the Research Associate for Parliamentary Discourse. The majority of his research focuses on the digital and cognitive study of lingustic meaning, while his Ph.D. examines the discourse semantics and cognitive stylistics of a corpus of scientific popularisations. He has worked with the Historical Thesaurus since 2005 and is currently researching its use in semantic and lexicological studies. His doctoral research was supported by the Carnegie Trust for the Universities of Scotland.

Dr Andrew Struan | Project Historian | International Center for Jefferson Studies, Monticello / University of Glasgow
Andrew Struan is an early-career academic historian with interests in British parliamentary politics. He was the Gilder-Lehrman Research Fellow (2011-12) at the International Center for Jefferson Studies at Monticello, Virginia and is an Honorary Research Fellow in the School of Critical Studies at the University of Glasgow. Both his Ph.D. and his ongoing research focus on the role of British parliamentarians in an Atlantic and global setting. He is also presently Co-Investigator on an HEA-funded project which incorporates linguistic resources into the teaching and research of history.

A History of Hansard

Read our latest blog on the history of Hansard, written by the project's consulting historian Dr Andrew Struan. 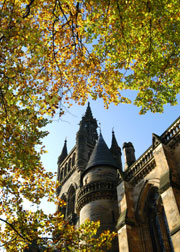 The project can also be contacted as follows: