Ann completed her Master’s in Cultural and Media Studies with The Open University in 2009 and holds an undergraduate degree in Drawing and Painting (Edinburgh College of Art/Heriot-Watt University, 1987).  Prior to commencing PhD research at CCPR in 2015, Ann was a practising visual artist and documentary film-maker. She has also been involved in education in the cultural and heritage sector, most recently with Royal Collection Trust and the National Galleries of Scotland.

During her 20 years as a visual artist she was elected to professional membership of the Society of Scottish Artists and appointed artist-in-residence on various local authority and Scottish Arts Council (now Creative Scotland) funded projects. Ann was also a member of the steering group that inaugurated the Scottish Artists Union in 2000 and co-chaired the artist and makers’ group ‘abc’. More recently Ann became involved in film-making – co-directing Carbuncle Town (2016), a feature-length documentary about the politics of town planning and regeneration in Scotland.

Ann is a part-time PhD candidate in the CCPR, supervised by Professors Philip Schlesinger and Raymond Boyle and Dr Inge Sørenson. Her research is focused on Scottish public service broadcasting and the role of the nations and regions remit as one of the BBC’s ‘public purposes’.

Entitled ‘Where Cultural Nationalism Meets Broadcasting Politics: Scottish Arts Television Programming and Values of the Public Sphere’, her thesis is an examination of the intersection where factual television, art history and national identity meet, arguing that mythologised identities are in evidence in Scottish specialist factual television, specifically in programmes examining the visual arts. Under analysis are the ‘reflecting’ and ‘representation’ aims of nations and regions programming, investigating their contribution to the democratic ideal of public service media and, thus, the role of specialist factual television within the ‘rational’ public sphere.

Ann is a Teaching Assistant on the MSc in Media Management and she also lectures on the MSc in Creative Industries and Cultural Policy.

2006 ‘The Internet and Democracy: Beyond the Techno-libertarian Rhetoric’, Variant, 2006 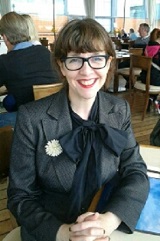