‌The Saltire Society celebrates the Scottish imagination and gives annual awards for literature, the arts, engineering, architecture, history and heritage. The Fletcher of Saltoun awards seek to recognise outstanding contributions to Scottish society across different walks of life, including contributions to Science, Arts and Humanities and Public Life. 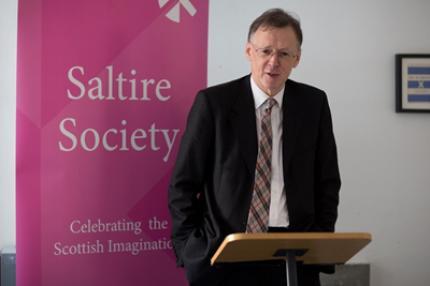 The awards celebrate the legacy of Andrew Fletcher of Saltoun, a seventeenth century Scottish writer and politician and a keen patron of the arts during his lifetime. Previous recipients include Tom Fleming, Donald Dewar, George Davie, David Daiches, Robin Jenkins and George Mackay Brown amongst others.

The Fletcher of Saltoun 2018 Award for Science went to Professor Graham Watt, the citation reading:

“Professor Graham Watt CBE FRSE is an academic who has had a distinguished career in academic general practice and public health, mostly spent at the University of Glasgow, and who founded the Deep End movement to develop professional support for GPs and their teams looking after the most socio-economically deprived people in Scotland. He has received the Fletcher of Saltoun Award in recognition of his contribution to science.”

I first heard of him while reading about Hamish Henderson, one of the best modern exponents of Fletcher’s dictum, on the wall of the Scottish parliament, that “if a man were permitted to make all the ballads, he need not care who should make the laws of a nation.”

I’ve a book coming out, “The exceptional potential of general practice”, which coincidentally puts this quote at the beginning, on a page by itself. I’ll tell you why.

I’ve had, and have, a career as a medical scientist, climbing high on a pile of papers and grants, as we are increasingly expected to do, but having climbed the mountain, or at least some of the foothills, I was left wondering, in the words of the song by Peggy Lee, “Is that all there is?”

Henry Sigerist, a US professor of the history of medicine, wrote, “The social causes of illness are as important as the physical ones. The medical officer of health and practitioners of a distressed area are the natural advocates of the people. They well know the factors that paralyse all their efforts. They are not only scientists but also responsible citizens, and if they did not raise their voice, who else should?”

Science is important, of course, finding out what it is possible to know by observation and experiment, making the occasional discovery and breakthrough but mainly chiselling away at doubt and protecting us from fads and fancies, but if there are limits to science that require us to be responsible citizens, what are they?

Sir Walter Scott, as President of the Royal Society of Edinburgh, was asked his view on whether the anatomist Robert Knox should be invited to lecture to the Society. Knox was notorious, although never charged, as the procurer of the bodies of the victims of Burke and Hare. Scott ruled against the lecture, saying “I think hearing it before Mr Knox has made any defence would be an intimation of our preference of the cause of Science to those of Morality and Common Humanity.”

Modern science, and I’m talking here about health research, is perversely exclusive, naturally in relation to issues which cannot be resolved by scientific method, as Scott implied, but systematically in terms of people with complex problems and places where it is difficult to carry out research. These people and places, are largely absent in the research literature but exist in the real world in substantial numbers, living harder lives, keeping the health service busy.

Alvan Feinstein, the father of clinical epidemiology, recognised the limits of research evidence. He wrote, “Until the methods of science are made satisfactory for all the important distinctions of human phenomena, our best approach to many problems in therapy will be to rely on the judgements of thoughtful people who are familiar with the total realities of human ailments.”

There are many such people, if you look for them, including the best general practitioners, who deal every day, unconditionally with whatever problems and combinations of problems their patients bring, many at the bottom end of society, at the receiving end of a decade of austerity.

When General Practitioners at the Deep End, working in Scotland’s 100 most deprived communities, first met in 2009, it was the first time in the history of the NHS that they had ever been convened or consulted, by anyone. Off the radar, largely unresearched, their experience and views were evidence to be tapped. A decade later, the group has identity, voice, a manifesto, shared activity, camaraderie and impact.

Inequalities in health in Scotland remain the worst in western Europe. The poorest 10% die ten years earlier than the richest 10% and spend twice as long in poor health before they die. In his book A Century of the Scottish People, TC Smout wrote, “The true grimness of the Scottish town was concealed from the tourist round of monuments and shopping centres, and was only revealed in the patient statistics of the Registrar General“.

Scotland is a world leader in talking and writing about inequalities in health. There are shelves of reports, policies, projects and plans, but still the Registrar General tells a sorry tale. We understand the theory but fail the practical. In the words of William Blake, “He who would do good to another must do it in minute particulars; the General Good is the plea of the scoundrel, hypocrite and flatterer”.

The Deep End has focused on minute particulars. More consultation time for patients with complex problems; serial consultations, building knowledge, confidence and agency in the unworried unwell, not pandering to the worried well;  adding capacity by linking practices to resources in the community; placing financial advisors in general practices, helping patients to battle the DWP, often raising their income by thousands of pounds; attaching young GPs to practices, releasing the time of experienced GPs so they can use their experience and knowledge to develop their service; sharing experience between practices, so that the best anywhere becomes the standard everywhere.

The late Dr Julian Tudor Hart, my mentor and friend who died in July aged 91, described the Inverse Care Law, by which the availability of good medical care tends to vary inversely with the need for it in the population served. The Inverse Care Law still exists in Scotland but has hardly ever been mentioned in an official report. Understand it not as a difference between good medical care in affluent areas and bad care in poor areas, but rather, as the difference between what Deep End practitioners can do and could do, if they were better resourced and better organised as a group.

We have learned that advocacy based on rhetoric has limited impact. When the music stops, power and resource tend to sit where they always have. The challenge is to win the argument on the ground, providing better solutions to health service problems, such as multimorbidity, fragmented care, pressures on emergency departments, resource constraints, widening health inequality. Advocacy by example.

The Deep End Project is an affirmation and expression of generalism, of local leadership and collective endeavour – a pre-institutional network fuelled by passion and common cause. There is no grand plan, only a direction of travel and a commitment to shared learning. The Scottish project has struck a chord. There are similar projects, now in Ireland, Yorkshire and Greater Manchester, and stirrings in Canberra and Pittsburgh. The story is being told in different ways in different places, in the best balladic tradition – something, I think that Andrew Fletcher would have recognised and of which I hope he would have approved.