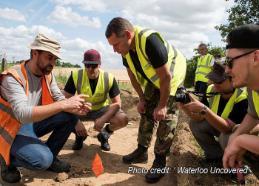 As of 2016, there were an estimated ~2.5 million veterans in the UK. Although post-traumatic stress disorder in the military has increased there is insufficient government-funded support; hence the growth of charitable organisations such as Combat Stress and Help for Heroes. Waterloo Uncovered (WU) is a project and charitable organisation that ‘aims to understand war and its impact on people — and to educate the public about it.’ WU uniquely combines this mission with assistance to Veterans and Serving Military Personnel (VSMPs) through active involvement in archaeological research into the Battle of Waterloo. Professor Tony Pollard, WU’s academic lead, is one of those responsible for distinguishing the unique scientific field of conflict and battlefield archaeology, establishing and refining investigative methodologies that now underpin the field. 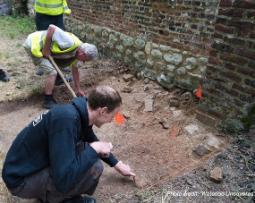 Due to this expertise and Professor Pollard’s leading role in conflict and battlefield archaeology, two officers from the Coldstream Guards, a former captain who developed PTSD after serving in Afghanistan and a serving major, invited him to collaboratively develop an archaeological research project that would both investigate the Waterloo battlefield and enable meaningful participation of military veterans. Selected serving Veterans and Serving Military Personnel (VSMP) transitioning to civilian life participate in Waterloo Uncovered. Most are dealing with physical injury and/or mental health issues such as PTSD, and active participation in research involving conflict archaeology offers an educational and social experience delivering proven health and well-being benefits. Many report life changes such as deciding to study archaeology, improvements to their well-being, and meeting their self-selected goals (reported by 81%).