Professor Anthony Chalmers, from our Institute of Cancer Sciences, is playing a leading role in a groundbreaking clinical trial for people with lung cancer.

Lung cancer is the most common cancer in Scotland, with around 5,300 people diagnosed each year. Advanced non-small cell lung cancer (NSCLC) counts for 80-85% of lung cancers in the UK. Around a quarter of patients are diagnosed with stage 3 disease, meaning that the cancer has spread from where it started to nearby tissue or lymph nodes.

Professor Chalmers is one of a team of researchers from Glasgow, Newcastle, Leeds and Manchester leading the UK-wide CONCORDE trial which will explore the use of several new drugs alongside standard radiotherapy to treat stage 3 NSCLC.

Radiotherapy kills cancer cells by damaging their DNA but human cells have developed methods of detecting and repairing damaged DNA, and many cancers are able to use these methods to survive a course of radiotherapy. Scientists have developed several different drugs that interfere with these methods of DNA repair. These drugs are often referred to as ‘DNA damage response inhibitors’, or DDRi.

With £900,000 of funding from Cancer Research UK, the team hopes that the new drugs will work to make radiotherapy more effective, increase its ability to eradicate tumour cells and potentially offer new hope to lung cancer patients. 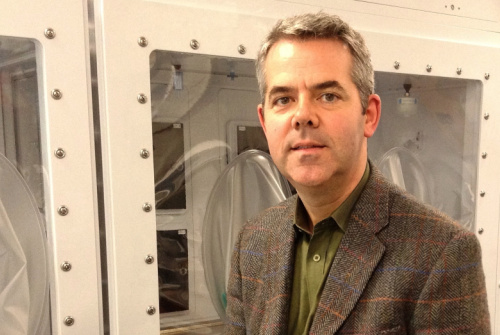 Professor Chalmers has been working with DDRi and radiotherapy for many years.

"We know that DDRi make lung cancer cells much more sensitive to radiotherapy in the laboratory, but we don’t know which of these drugs will be the most effective in patients with lung cancer.

"In the CONCORDE trial we will be able to test several of the most promising DDRi and find out which have potential to improve outcomes for lung cancer patients, and which might cause additional side effects."

"This trial will be at the forefront of drug-radiotherapy combination clinical trials and has the potential to transform the care for patients with lung cancer.

"This investment from Cancer Research UK enables this work to happen and drives our ideas forward. Without funding like this we couldn’t make advances both in developing new treatments and learning how to reduce side-effects from therapy.

"We are also grateful to the support of AstraZeneca who we have signed agreements to test two of their medicines, with potentially more to follow."