Glasgow scientists lead the way in understanding how the brain processes visual stimuli such as facial expressions and scenes. This research is critical to the development of a truly humanoid-like robot.

To make a robot that can recognise a facial expression with the same speed and intuitiveness as a human, you need to understand the incredibly complex cognitive processes that underpin abilities like perception and recognition. Using the idea of the brain as an information-processing machine, our neuroscientists are aiming to decode these processes. Ultimately, they want this information to be rendered in a way that can be implanted back into a robot.

Professor Philippe Schyns leads the research of the Institute of Neuroscience & Psychology. "The human brain is one of the last remaining enigmas of scientific knowledge," he says. "How do 100 billion neurons work together to produce the myriad complex cognitions of the human mind?" Describing the research of the Institute, he continues: "We have developed groundbreaking methods to reverse-engineer human cognitive processes – that is where, when and how specific information is processed – from complex brain activity. Our aim is to then implant these formal models into neuro-circuits, human avatars and robots to endow them with human-like flexible cognitive abilities."

Given the enormity of the challenge, Glasgow collaborates with many world-leading institutions that are also focused on understanding and ultimately replicating the complexity of the mind. "If robots of science fiction are to become reality," says Professor Schyns, "they will need to be much more aware of their surroundings and be able to adapt to situations accordingly. This kind of deep understanding is a very old goal of artificial intelligence."

In the field of artificial intelligence, it’s far easier to create a machine to beat you at chess than it is to create one to recognise your look of disappointment on your face when you lose. The theory, Moravec’s paradox, goes that the longer a cognitive process has existed in evolutionary terms, the more sophisticated and refined it has become, and its complexities become less apparent to ourselves and therefore harder to reproduce."

Abstraction, of the sort required to win at chess, is very new in evolutionary terms, whereas the ability to recognise fear or disgust in another animal has been evolutionarily hardwired for much, much longer. When something is innate we tend to diminish its complexity. We perceive, incorrectly, that the things we do easily are simple. 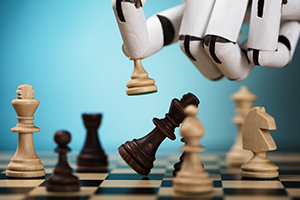 Ultimately, Glasgow's research may lead to a robot that lets you win the occasional game of chess - just because you're looking a little bit down about losing.