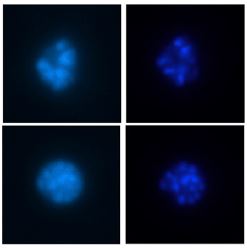 Malaria is a disease caused by parasites from the genus Plasmodia that are transmitted to humans by Anopheles mosquitoes. Two related parasite species cause the majority of disease and death from malaria in humans. They are Plasmodium falciparum and Plasmodium vivax. P. falciparum is the more lethal of the two and is prevalent in Sub-Saharan Africa.  According to the 2013 World Malaria Report, 3.4 billion people (almost half of the world’s population) are at risk of malaria, and in 2013 it caused an estimated 584 000 deaths mostly among African children. However, malaria mortality rates among children in Africa have been reduced by an estimated 58% since 2000.

Symptoms of malaria include fever, headache, and vomiting, and usually appear between 10 and 15 days after the mosquito bite. If not treated, malaria can quickly become life-threatening by disrupting the blood supply to vital organs including the brain. In many parts of the world, the parasites have developed resistance to a number of malaria medicines.

Malaria has a complex lifecycle which involves sexual reproduction in the female Anopheles mosquito, and asexual reproduction in human hepatocytes (liver cells) and erythrocytes (red blood cells). This complexity makes creating effective therapeutics and vaccines challenging.  Increasing resistance to anti-malarial drugs is also having an impact on treatment in endemic regions.‌

Research at the Centre examines molecular mechanisms of sexual stage development in the malarial parasite. We use a rodent malaria model (Plasmodium berghei) that allows us to study the parasite’s life cycle in its entirety both in vitro and in vivo. In particular, we are focussing on the following:

WHO fact sheet on malaria

WCIP Comic Malaria: the battle against a microscopic killer