The Indus civilisation and the lost river

‌‌The mystery of how an early civilisation in north-west India and Pakistan thrived without a river source may have been solved in a study published in Nature Communications this week by a global consortium of scientists including researchers from the Scottish Universities Environmental Research Centre and Imperial College. These findings challenge our understanding of how early civilisations developed.

Early urban society settlements locations are thought to have been influenced by river migration. However, the largest concentration of the Bronze Age Indus Civilisation (who lived around 4,600–3,900 years ago) settlements were located between the Ganges-Yamuna and Indus river systems in India and Pakistan, far from major active rivers. How these settlements prospered away from rivers had remained unclear. 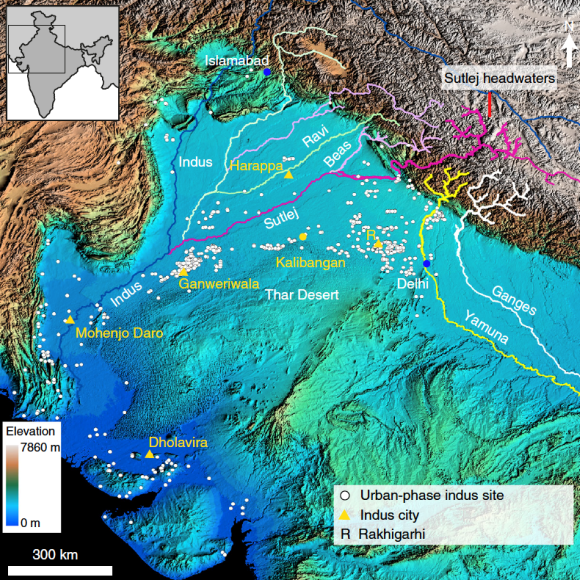 Prof. Darren Mark and colleagues find evidence of a major paleochannel (the remnants of an ancient river) through these settlements, which was once the current Sutlej River. By dating the sediments from this ancient channel, they find that 8,000 years ago the river changed course. They show that the settlements did not develop adjacent to a large active river fed from the Himalaya as has been commonly believed. Instead the settlements thrived and continued to develop along the relict paleochannel. The authors suggest that the diversion of the river led to reduced flooding, and that seasonal rains providing a water source in the upper valley, which together contributed to the success of the Indus civilisation in this setting.