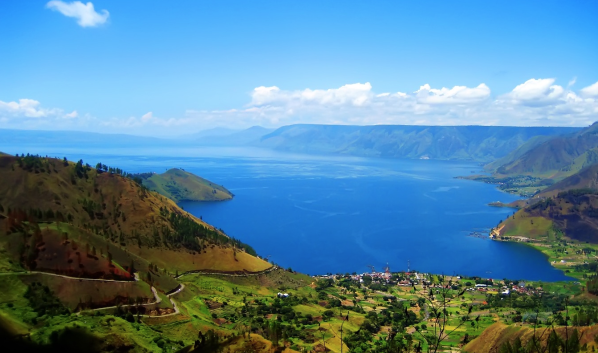 Today, Lake Toba is an amazing natural wonder on the island of Sumatra. It's hard to imagine there is a more beautiful place to visit - cool refreshing atmosphere, expanse of clear water turning blue, green mountains and stunning scenery is a small part of the image of a giant lake that is 900 m above sea level. Lake Toba is a crater lake area of 1,145 km2. In the center dwells an island with an area that is nearly proportional to the area of Singapore. Lake Toba formed after the eruption of a super volcano approximately 75 ka. At that time 2,800 km2 of volcanic materials spewed out of Mount Toba erupted volcanic ash blown by the wind to spread to half the earth. Due to the eruption of a super volcano, Mount Toba is thought to have caused mass death and extinction of some species of living things. The eruption of Mount Toba potentially led to changes in the earth's weather and the onset of ice ages that impacted the development of civilization.

The SUERC-led paper presents the most accurate and highest precision age for the Young Toba Super Eruption and uses the tephra that was produced from the eruption to link climate archives from around the globe.

A high-precision 40Ar/39Ar age for the Young Toba Tuff and dating of ultra-distal tephra: Forcing of Quaternary climate and implications for hominin occupation of India

Abstract: A new high-precision inverse isochron 40Ar/39Ar age for the youngest Toba super-eruption is presented: 75.0 ± 0.9 ka (1 sigma, full external precision, relative to the optimisation model of Renne et al., 2010, 2011). We present the most accurate and robust radio-isotopic age constraint for the Young Toba Tuff. 40Ar/39Ar ages for biotite shards harvested from ultra-distal Toba tephra deposits (>2500 km) preserved in archaeological sites in the Middle Son Valley and Jurreru Valley, India, establish provenance with the young Toba super-eruption. The air-fall tephra at these sites can be used as an isochronous horizon facilitating stratigraphic and temporal correlation throughout India. The high-precision 40Ar/39Ar age for the young Toba tephra can serve as a tie point for linking of the multiple Greenland ice cores beyond the GICC05 timescale, and permits correlation to other absolutely dated palaeoclimate archives for the testing of synchronicity in the response of the global climate system.