New research into one of the most volatile periods in Earth’s geological history has narrowed down the precise age of a meteorite impact in the Ukraine around 65 million years ago, ruling out the chance that it contributed to the extinction of the dinosaurs but offering new insight into the planet’s climate history.

A team of geologists, led by researchers from the University of Glasgow, applied state-of-the-art dating techniques to samples of melted rock created during the fiery landing of a giant meteorite in Ukraine’s Kivorohad Oblast region.

The explosive collision formed a 15-mile-wide basin known as the Boltysh impact crater, which over time filled with water and formed a lake. 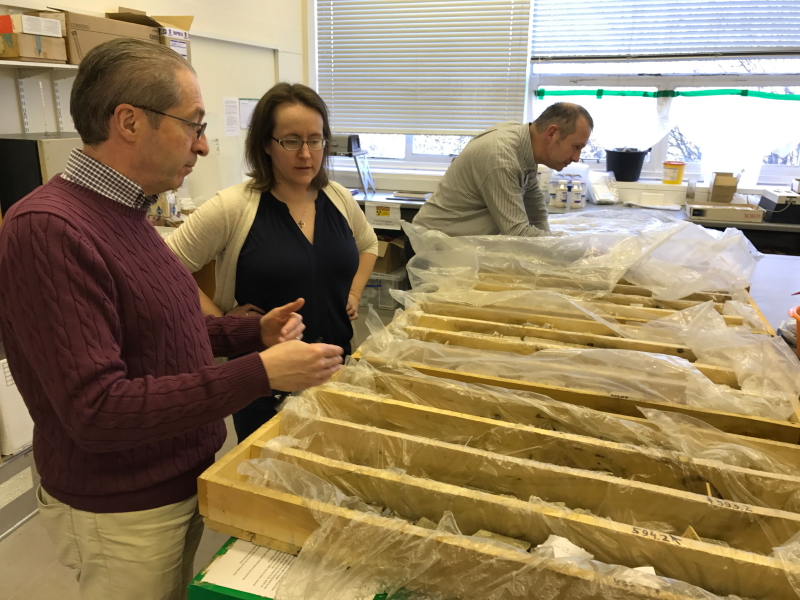 Dr. Annemarie Pickersgill of the University of Glasgow and co-author Prof. Simon Kelley with the Boltysh rock core discussing climate implications of a medium sized impact.

Previous analysis of samples from the Boltysh crater, undertaken decades ago, suggested that the meteorite may have struck the Earth between two and five thousand years before the Chicxulub meteorite impact in Mexico’s Yucatán Peninsula.

The Chicxulub impact is widely believed to have caused the mass extinction event which made non-avian dinosaurs extinct, and the climate event which created the geological signature known as the Cretaceous–Paleogene boundary. However, questions still remained over whether the Boltysh impact might have occurred close enough in time to have had an effect on both.

The new analysis, led by researchers from the University of Glasgow, suggests that, in fact, the impact happened around 650,000 years after the Chicxulub event.

The results, published today (Friday 18 June) in the journal Science Advances, provide further support for the Chicxulub extinction theory. The findings could also help us better understand how our atmosphere has responded to climate change in the past.

To determine the date of the Boltysh impact more precisely than ever before, the researchers selected four samples from two rock cores taken from the Boltysh crater, containing rocks generated during the impact event and lake sediments which accumulated over time after the crater was formed. They determined the age of the samples using the argon-argon dating facility run by Professor Darren Mark at the Scottish Universities Environmental Research Centre in East Kilbride.

Argon-argon dating measures the radioactive decay of potassium to argon. The level of decay acts as a ‘rock clock’, which ticks down over geological time and allows researchers today to determine when the rocks were created during the Boltysh impact event.

Dr Annemarie Pickersgill, research associate in meteorite impacts at the University of Glasgow’s School of Geographical and Earth Sciences, led the research. Dr Pickersgill said: “Thanks to the efforts of researchers around the world, argon-argon dating has become increasingly accurate over the last few years. That gives us a much sharper lens to examine the details of events like the Boltysh impact, and be able to determine with much more confidence exactly when they happened.

“Our analysis suggests that the impact occurred very close to 65.39 million years ago. That puts it firmly after the Chicxulub impact and the formation of the Cretaceous-Paleogene boundary, evidence for which is found in geological records around the world.

“Instead, the results allow us to place the Boltysh impact more accurately in our timeline of what happened to the Earth in the period after this mass extinction event, and better understand our deep geological history.”

In the paper, the researchers draw links for the first time between their new dating of the Boltysh impact and evidence for a known ‘hyperthermal’ event found in the Earth’s sediment record – a period of extreme global heating scientists call the lower C29N hyperthermal.

At that time in Earth’s history, volcanoes in India known as the Deccan Traps were releasing vast amounts of greenhouse gases into the atmosphere, accelerating a period of global climate change. Evidence of the Deccan Traps’ contribution to climate change has been found in sediment records around the world.

Dr Pickersgill added: “Paleoclimatology aims to help us understand and adapt to today’s changing climate by studying how our atmosphere responded to environmental stresses in the past.

“Being able to link the Boltysh lake sediments to the lower C29N hyperthermal is another piece of the jigsaw which will form a clearer picture of how our planet has responded to climate change in the past.”

The team’s paper, titled ‘The Boltysh impact structure: An early Danian impact event during recovery from the K-Pg mass extinction’, is published in Science Advances. Researchers from the Universities of Glasgow, St Andrews, Leeds, and Aberdeen, contributed to the paper. The research was supported by funding from the National Environment Research Council (NERC) and the Leverhulme Trust.

With support from the Leverhulme Trust, Dr Pickersgill will continue to study the effects of impact craters on Earth’s history.